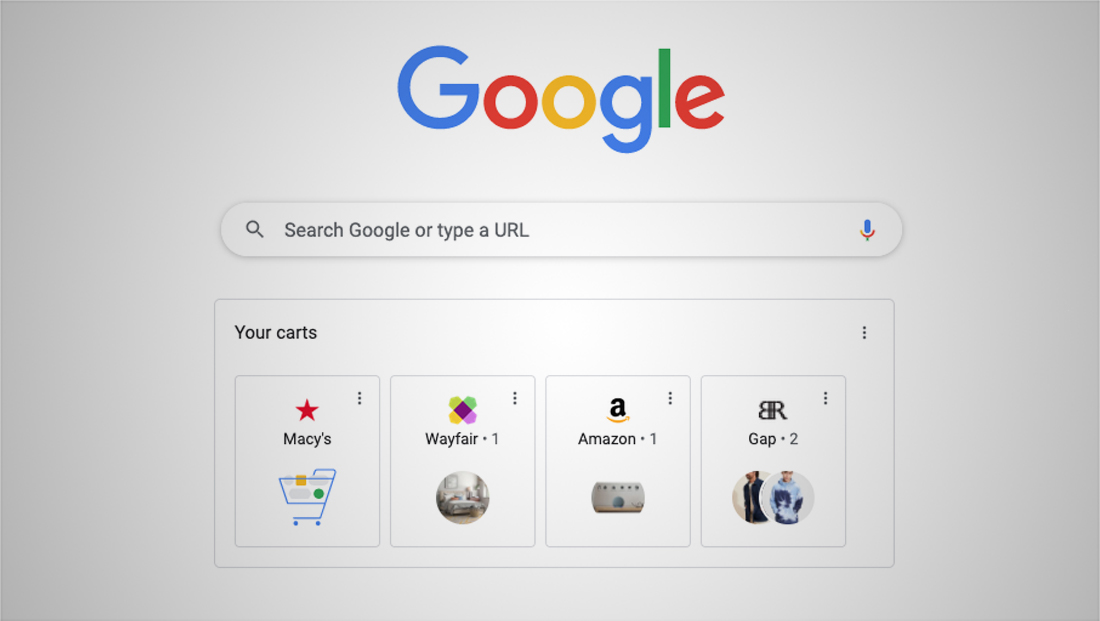 In a feature first announced in May 2021, Google Chrome is now showing a user’s shopping carts from across the web on the browser’s start page.

The feature puts boxes representing each store (or family of stores) on the start page under commonly used sites that Chrome can automatically determine if assuming this feature is enabled.

Chrome attempts to pull in images of the items in the cart, though this does not appear to be fully compatible with all ecommerce sites.

The feature works, based on anecdotal testing, with retail giant Amazon as well as major retailers including Macy’s, Gap and Wayfair. It also appears to be compatible with shopping sites powered by major ecommerce platforms, including Shopify.

During testing, it was also observed that the feature combined the shopping carts of Gap, Old Navy and Banana Republic, which are all owned by Gap, into a single box on screen. The brands’ carts are combined on their respective websites, so this is likely why this works the way it does.

Each box also includes the site’s favicon or, if that’s unavailable, a colored circle with the first letter of the site name. Below that are circular images of items in the cart, or a generic cart icon in Google’s signature style, if this feature is not compatible.

Users can remove the boxes individually or prevent Chrome from ever “remembering” carts on certain domains.

Clicking on one of the boxes takes the user directly to the pre-filled shopping cart on the merchant site so the user can continue checkout. The feature presumably requires ecommerce sites to be able to save carts via cookies or other technology, a feature sometimes known as a “persistent cart.”

Many ecommerce platforms offer the ability to message users about abandoned carts, assuming they have provided contact information, but this feature doesn’t necessarily require that level of detail. Stores can also target users who add items to their carts but don’t buy using targeted advertising.

When users add items to a shopping cart or bag on an ecommerce site but don’t buy, this is commonly called “abandoned carts” or “cart abandonment” and it’s a big challenge for most online retailers.

Many stores see users adding items of interest to the cart — but then never finish checkout. Being able to nudge users to finish checkout with a special offer or even just a reminder can often help improve conversion rates and sales. Even if the carts are converted just a small percentage of the time, it can still have a significant impact on a business.

The Google start page appears when users launch the browser or open a new tab, unless a different default page is set. It also includes, quite naturally, a Google search box.

Google is not charging for this service and as this feature rolls out widely, it could have a significant impact given the browser’s nearly 70% share of the Web browser market. There does not appear to be any way for merchants to gain access to information such as how many people are seeing these boxes or incorporate a special offer.