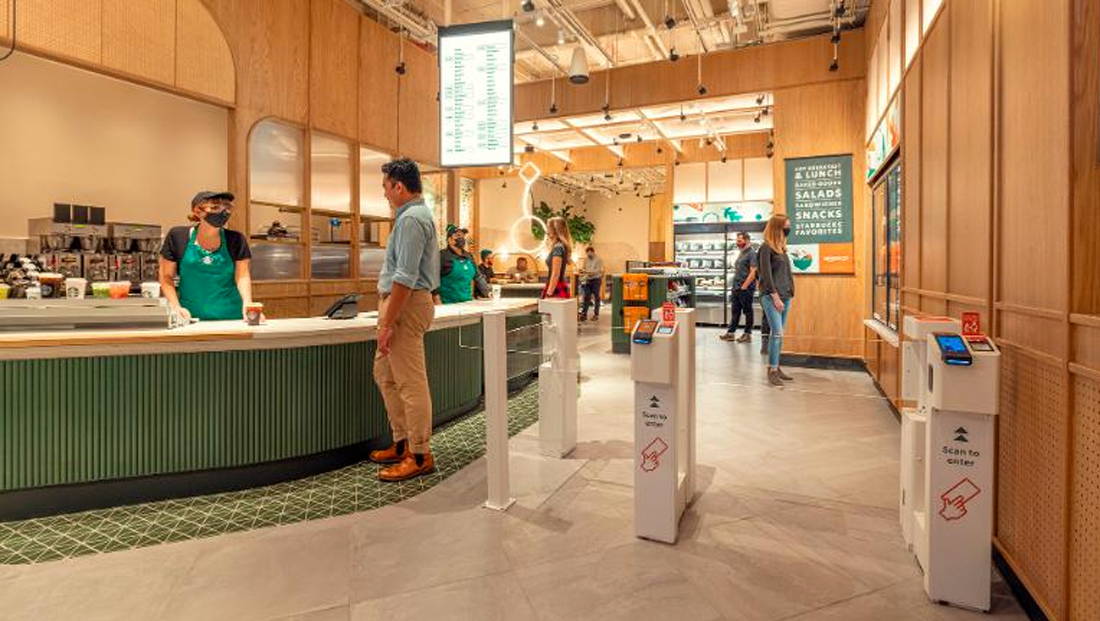 Starbucks and Amazon have teamed up to open a hybrid coffee shop and convenience store in New York City.

The store combines the Amazon Go concept of a convenience store that uses cameras and sensors to track what shoppers pick up and charges them accordingly when the walk out of the store.

However, that same technology isn’t implemented for Starbucks barista made beverages, so customers still order from a person and pay at a POS unless they’ve pre-ordered through the chain’s app, which doesn’t directly integrate with Amazon’s.

Starbucks’ pre-packaged line of food items and bottle beverages are available as part of the Amazon Go area and can be purchased and paid through via the “walk out” checkout process, however.

Amazon and Starbucks are planning to open another version of this concept in another New York City locale as well as a yet to be determined city.

In many ways, the format is similar to Starbucks locations placed inside of larger stores such as Target. These locations typically require separate payment and, while they usually accept payment through Starbucks’ app, customers typically can’t redeem rewards, though most purchases still count toward earning rewards.

While individual items such as packaged products and even fresh produce are relatively easy to track via camera like Amazon has already implemented, it would likely be a bit more challenging to use similar technology to track customers’ drinks, which have potentially thousands of combinations that could affect pricing.

It’s perhaps conceivable that baristas’ actions could be tracked as they prepare a drink, but this would likely also require knowing which barista is preparing whose order — and would also have to account for the fact baristas often prepare different orders simultaneously.

All of that may be moot, however, given that Starbucks had, even prior to the pandemic, been slowly transitioning customers to ordering ahead and paying via mobile apps.

Ultimately, the entire strategy could benefit both companies — Amazon benefits from customers in search of coffee being prompted to pick up a few items they need from the Go part of the store and vice versa.

It’s also providing an interesting glimpse at Starbucks’ so called “third place” concept that is widely viewed as making it so successful.

The concept gets its name from the fact Starbucks wanted customers to consider its stores the third place outside of their home and workplace. That’s why it offers up free wifi, comfortable seating and workspaces.

However, the pandemic ultimately put a big wrinkle in the concept since many locations closed or reduced indoor seating. With more people working from home, morning coffee runs on the way to work slipped significantly and stores started seeing upticks in the afternoon, presumably because people were having their morning coffee fix at home but then venturing out for a break later in the day.

While morning traffic has started to pick back for Starbucks, its “third place” model may need to evolve. One example is that, once the pandemic subsides and locations are able to open back up with their full range of seating available, the stores could become a “third place” in the sense of them being a second office as more employers embrace remote and hybrid models.