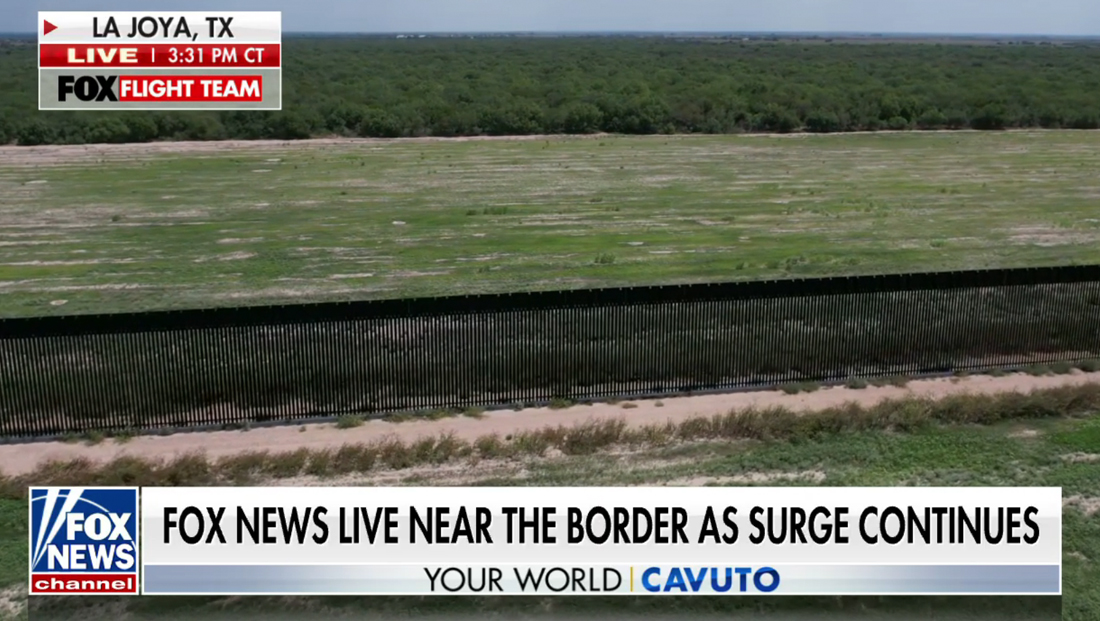 Fox’s “Your World with Neil Cavuto” was covering what it labeled as a “surge” in crossings from Mexico into the U.S. — while the live video it aired showed nothing of the sort.

Casey Stegall appeared live on the show June 20, 2022, from near what the network billed as a busy crossing point near La Joya, Texas.

As Stegall began rattling off statistics that do, in fact, illustrate an increase in border crossings and attempts, the view behind him was notably void of any people, with only empty ground and greenery visible.

It wasn’t immediately clear if his standup location would have afforded a view of where immigrants would attempt to cross.

The network then cut to live drone footage, dubbed as being from the “Fox Flight Team,” showing an aerial view of the border, including a gap in the fence in the La Joya portion.

Again, the shot was devoid of any human activity.

Fox has become known for its stepped-up coverage of so-called “migrant caravans” and U.S.-Mexico border immigration issues in particular, often painting them as violent, dangerous and fueled by drug trafficking and other crimes.

Stegall also cited government data showing that more than 239,000 “encounters” were recorded along the southwest border in May 2022, without defining the term.

Of course, a live shot at a particular time during the day isn’t necessarily representative of what it looks like all the time and Fox also aired taped footage that showed individuals being moved from CBP vehicles, being led off in handcuffs and sneaking through high vegetation, though the scenes were relatively calm and orderly, with no more than perhaps 50 individuals shown at any one time.

After Stegall’s report, Fox moved on to a live interview with Texas Department of Public Safety Lt. Chris Olivarez. The network continued to air live footage from the drone showing empty land during the first part of this interview.

It eventually cut away to more taped footage and stills, including some shots that showed more crowded scenes, but none that appeared to be wild or out of control.

Some of the footage was labeled as “file,” though the exact date it was shot was not indicated.