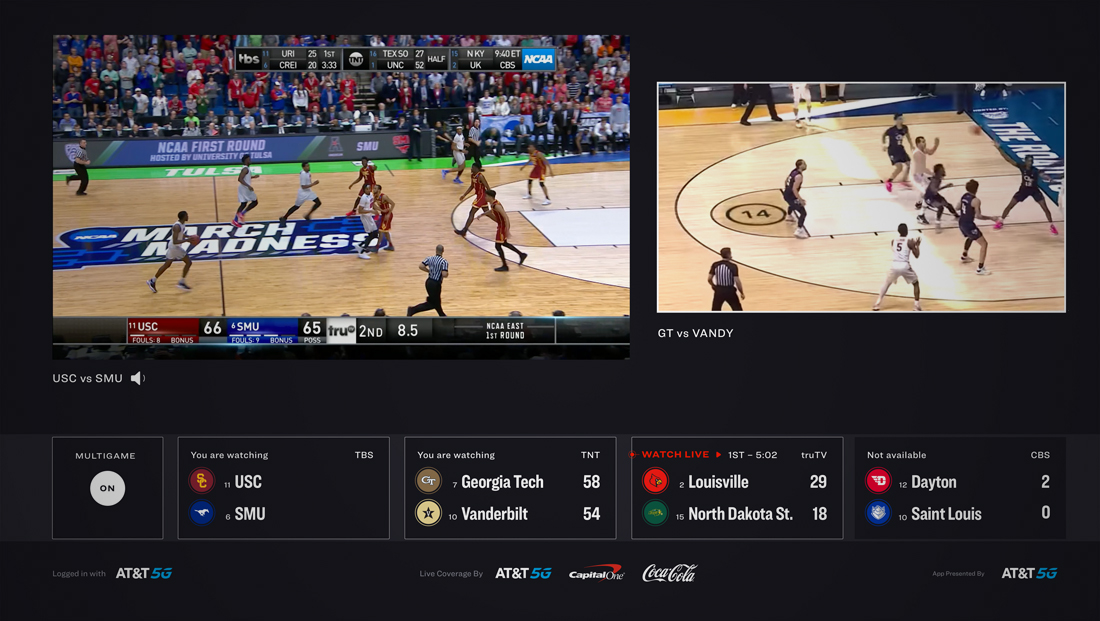 NCAA March Madness Live is expanding its streaming and second screen offerings for its 2022 go around — along with a cross network streaming experience.

First up is a new multi-game option that will let fans using compatible devices view two games at the same time.

In the imagery released by WarnerMedia, which runs the March Madness Live offering through its Turner Sports division along with CBS, the user interface show two boxes for the games, one slightly smaller than the other. Below this viewers can check live, past and upcoming game information, including sports. The screen also displays presenting sponsors’ Coca-Cola, Capital One and AT&T 5G logos.

The second game will not feature audio.

Viewers can also still use the picture in picture option on mobile devices, desktops and tablets that allows streaming to continue while browsing other parts of the March Madness Live app.

In addition, a Starting Lineup Challenge will be added through a partnership with SharpLink Gaming that walks users through the process of buying and selling team members and gives them the opportunity to earn points as the tournament progresses and team values increase.

The Capital One NCAA March Madness Men’s Bracket Challenge is adding a new feature designed to remind participants of what teams they slotted to win each level as a reminder to know who to cheer on.

Invesco QQQ is sponsoring Matchup Analysis, a data driven bracket picking experience. There will be over 20 datapoints to select from when viewing brackets as well as visualization features to illustrate possible outcomes of remaining games. Once the Sweet Sixteen begins, the Path to Championship feature will be available inside the Bracket IQ experience.

The Fast Break feature will get even smarter this year with the introduction of enhanced analytics powered by Second Spectrum, part of the Genius Sports family, that will breakdown gameplay stats and augment video with graphic overlays detailing the most critical data points.

This live, whip-around coverage will also offer quick turnaround highlights, real-time analysis by industry stars, social reaction and commentary for all games. Similarly, The Catch Up presented by AT&T 5G will offer fans up-to-the-minute recaps of games in session so that users can get up to speed on the game in progress before entering to watch live in the app.

Game Center, the central hub of NCAA March Madness Live, returns to provide all the news, highlights, and interactive content needed to augment the fan experience. Game Center will be featured on all connected devices and include Condensed Games presented by AT&T 5G to give fans the most important moments of live game action.

To fuel engagement and connection with users, Game Center will feature the Madness Feed, powered by LiveLike, to offer tournament updates, interactive polls and quizzes.

The feed will be updated during the busiest rounds of the Tournament to create a unique experience alongside video viewing.

Outside of these interactive and second screen experiences, fans can also access all tournament games via live streaming on TBS, CBS, TNT and truTV’s digital platforms, as well as participating TV provider websites and apps. The CBS telecast can be viewed via the web and on mobile devices with no authentication required and via Paramount+ on connected devices.