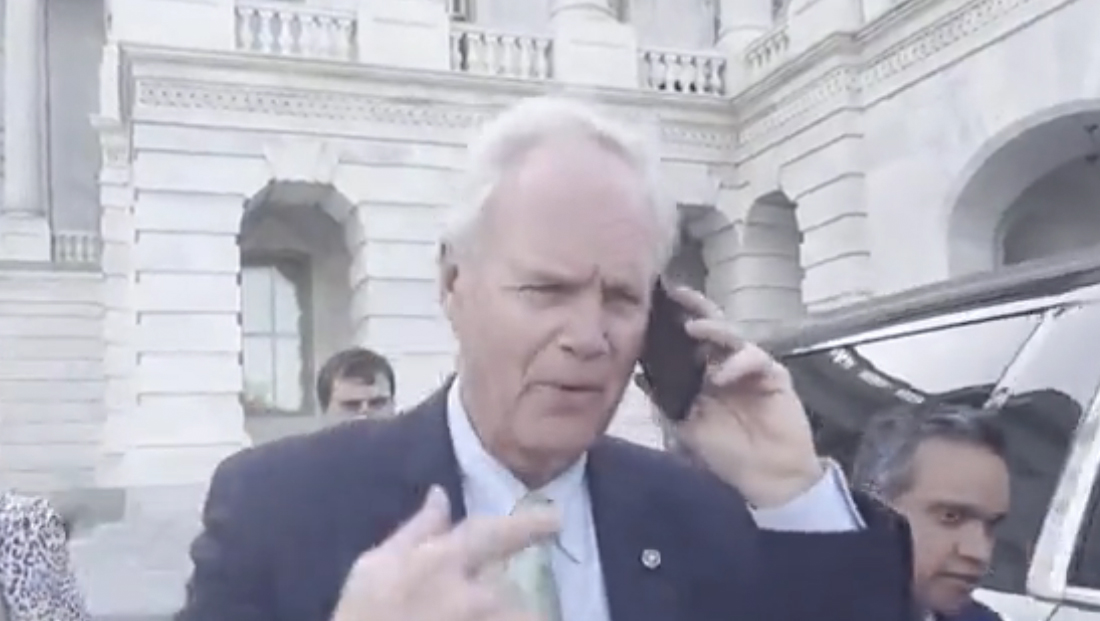 A senator embroiled in allegations that his office tried to pass fake elector lists to Mike Pence attempted to dodge reporters’ questions June 21, 2022, by apparently pretending he was on the phone.

Sen. Ron Johnson (R-Wisconsin) was leaving the Capitol June 21 when he was approached by a small pod of reporters.

“I’m on the phone right now,” Johnson said when a reporter asked how much he knew about his chief of staff’s alleged communications with the VP’s team.

It appears the reporter was using the fact that Johnson’s phone screen had a visibly blank screen to assume the call was being faked.

Others have noted the senator did not speak to whoever might have been on the phone, though it’s certainly possible he was simply listening to an extended part of the conversation from whoever was on the other end or, perhaps, was listening in a conference call.

Sen. Ron Johnson so much didn't want to talk to reporters about his office trying to pass fake elector lists to the vice president's office that he tried to pretend he was on the phone. pic.twitter.com/V1VwBDs42t

It’s entirely possible for a phone to show a blank screen during calls — this is often an option that users can turn off and on. Dimming or extinguishing the screen during calls can be a way to help preserve the battery since screens are often one of the biggest consumers of power.

Johnson, however, eventually put down the phone without further comment on the alleged call and addressed reporters. He did appear to glance at the device screen and touch something on it, though this could have been part of the act of appearing to end the alleged phone call.

In speaking to reporters, Johnson attempted to spin the allegations as a “non-story” and said he was “basically” unaware of the messages sent by his staff.

NBC’s Chuck Todd later noted that Johnson claimed he has a different kind of phone, but declined to indicate what type. The U.S. government does provide modified mobile devices to some officials, mainly for security reasons, though it’s not clear if Johnson would be eligible for such a phone.

Chuck concluded that “I guess we’ll have to leave it right there for now,” although other news outlets are largely operating under the assumption that the call was, indeed, being staged.

Johnson’s chief of staff, Sean Riley, attempted to send a member of Pence’s staff, Chris Hodgson, a list of fake electors from his state who would had been lined up to ignore Biden’s win and cast their votes for Trump. Wisconsin uses a “winner takes all” system for its electoral votes — a system used by 47 other states as well.

The party whose candidate wins the states electoral votes decides who it will use as electors. There is no rule preventing electors from casting their vote for the winner of the electoral votes, but it’s unlikely to play out that way as those selected are often longtime party loyalists or prominent figures in state politics of the party.