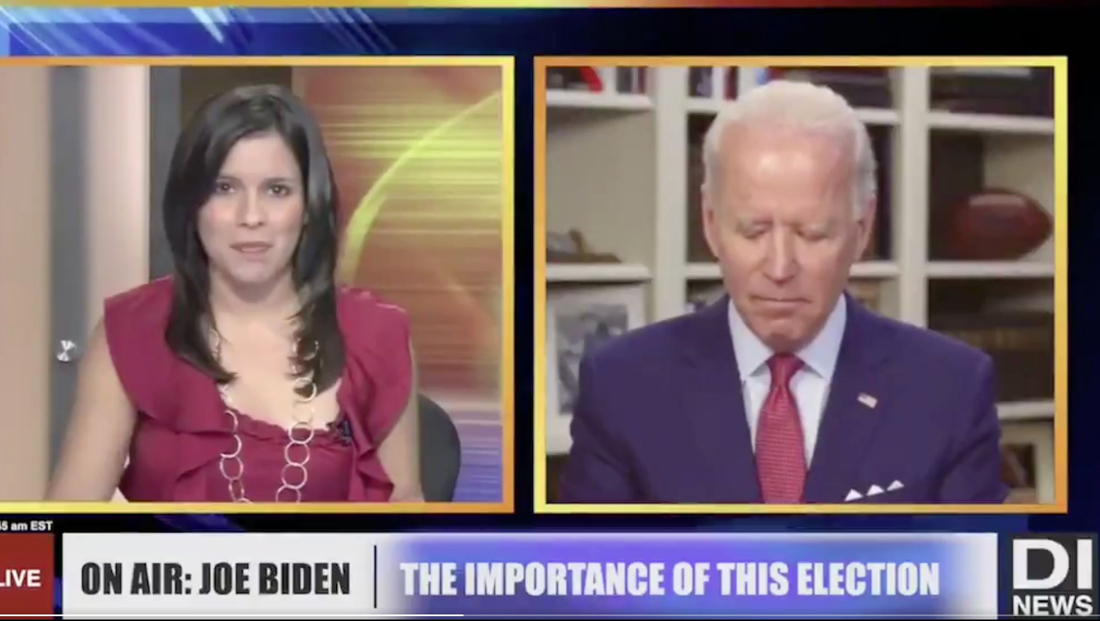 The clip, which was labeled by Twitter as “manipulated media” and eventually deleted over copyright, included elements from a 2011 interview on KBAK, the CBS affiliate in Bakersfield, California.

The original clip, which is embedded here, shows an anchor tossing to a live hit of actor Harry Belafonte during a press tour for the film “Sing Your Song,” which Belafonte starred in.

“Wake up Harry!” the anchor says while the two box on screen shows Belafonte, somewhere in New York, appearing to catch a nap while waiting for his next interview (for the record, Belafonte’s publicist told KBAK later that he was not asleep).

In the doctored version Dan Scavino posted, Belafonte’s image is replaced with a shot of Joe Biden sitting in his now familiar study with his eyes closed or looking down — with Belafonte’s audio retained.

The clip also “zoomed in” on a key portion of the screen, obscuring the KBAK logo bug in the lower left corner and with fake graphics labeling it as being from “DI News.”

Some political watches have noted that Scavino didn’t simply retweet the fake video — as Trump and other White House staffers have done in the past — he posted it directly to his account.

John Dabkovich, who has since moved on to KOVR in Sacramento, called out the clip as fake — noting that he was the co-anchor in the studio at the time of the 2011 broadcast. In the full original clip, he appears at the anchor desk.

As the Twitterverse pounced on the clip — both calling out Scavino or buying the doctored video hook, line and sinker — Twitter intervened and added a tag noting the clip was “manipulated” but left it online for several hours before, at least according to the placeholder media that now appears in its place, a copyright complaint prompted it to delete it.

It’s not immediately clear who made such a complaint.

Both movie stars and key political figures often participate in media tour-like segments where they are in a studio, often rented out, with a single camera and mic. The signal is available for media outlets to pick up and they are typically given a window of time for their anchors to ask questions live.

These setups typically require the audio from the anchors to be routed to an earpiece in the person being interviewed — though this can be prone to technical glitches. It appears that may have been what happened back in 2011 — Belafonte either couldn’t hear the anchors in Sacramento (or he was, indeed, fast asleep).

It’s also not that uncommon for those appearing on these press tours to close their eyes in between appearances — appearing on TV under bright lights can be tiring and cause eye irritation.