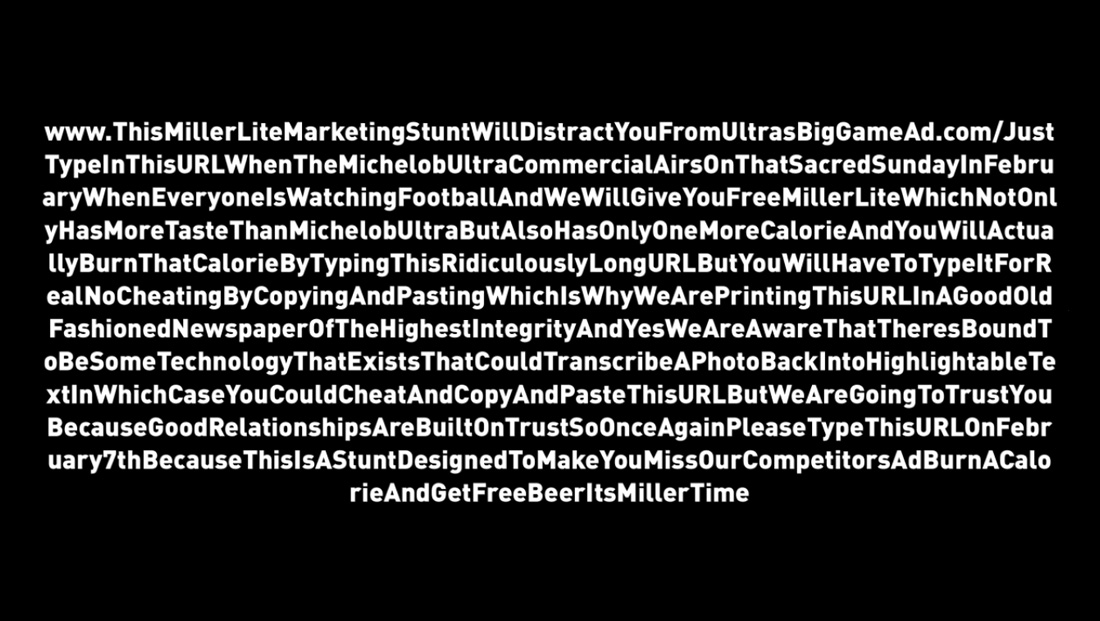 The URL is 836 characters under the domain ThisMillerLiteMarketingStuntWillDistractYouFromUltrasBigGameAd.com (itself 66 characters).

After the domain is a 770 character directory path that gives instructions to “type in this URL when the Michelob Ultra commercial airs on that sacred Sunday in February when everyone is watching football.”

Miller Lite says that the first 5,000 people who type in the URL and hit “enter” when the Michelob ad airs during Super Bowl LV Feb. 7, 2021 will be sent $8, meant to represent the cost of a Miller Lite.

The company also ties in the use of the “ridiculously long” URL as “calorie burning,” a key link to its low calorie marketing.

The company claims it has “scientifically” tested and typing the URL burns one calorie, exactly the different between a serving of Miller Lite and Ultra.

This domain itself manages to avoid using both the full Super Bowl and Michelob Ultra name — which could trigger trademark disputes with ICANN, the organization that controls the domain name space for the entire Internet.

It does, however, user the full Michelob Ultra name in the directory path, which technically wouldn’t be a violation of ICANN domain registration rules involving trademarks since it’s not part of the top level domain (e.g. before the “.com”).

The full URL is being printed in a “good old fashioned newspaper with the highest integrity” to “force” consumers to type it in manually.

The stunt is also self deprecating — it acknowledges in the URL itself that OCR or other technology could likely be used to generate text characters that could be copy and pasted, but says “we are you going to trust you because good relationships are built on trust.”

Miller also, quite cleverly, made the page at the URL www.millerlite.com/NiceTryButYouHaveToTypeTheWholeURLToWinAPrizeAndBurnACalorie rank first on most searches related to “Miller Lite URL.”

It’s worth noting that some Google and Google Chrome users are being given “thismillerlitemarketingstuntwilldistractyoufromultrasbiggamead” (the first 62 characters of the domain name) when “This Miller Lite…” is entered into search.

Visitors to that page, after verifying their age, are greeted with a message reading “No, no, no. The current URL is:” before displaying the URL as an image file.

It’s not clear if users will need to verify their age on Super Bowl Sunday (which could add to both the time it takes to register to get your $8 and perhaps burn another fraction of a calorie) but it seems likely given most advertising practices around alcohol.

For what it’s worth, unscientific testing of entering non-case sensitive variations of the “/NiceTryButYouHaveToTypeTheWholeURLToWinAPrizeAndBurnACalorie” directory path do appear to work — though the browser bar updates to the correctly capitalized URL.

Miller also took care of Spanish speaking fans as well — using the domain EsteURLDeMillerLiteTeDistraeraDelComercialDeUltraEnElGranJuego.com, which is roughly the translation of the English one. The directory path is also translated to Spanish.

Miller says it will send the $8 to eligible consumers via Venmo.

In the spirit of good sportsmanship, we’re not posting the full Miller Lite URL here but you can at least save some typing by grabbing the domain name above (or see if autocomplete works on your device).