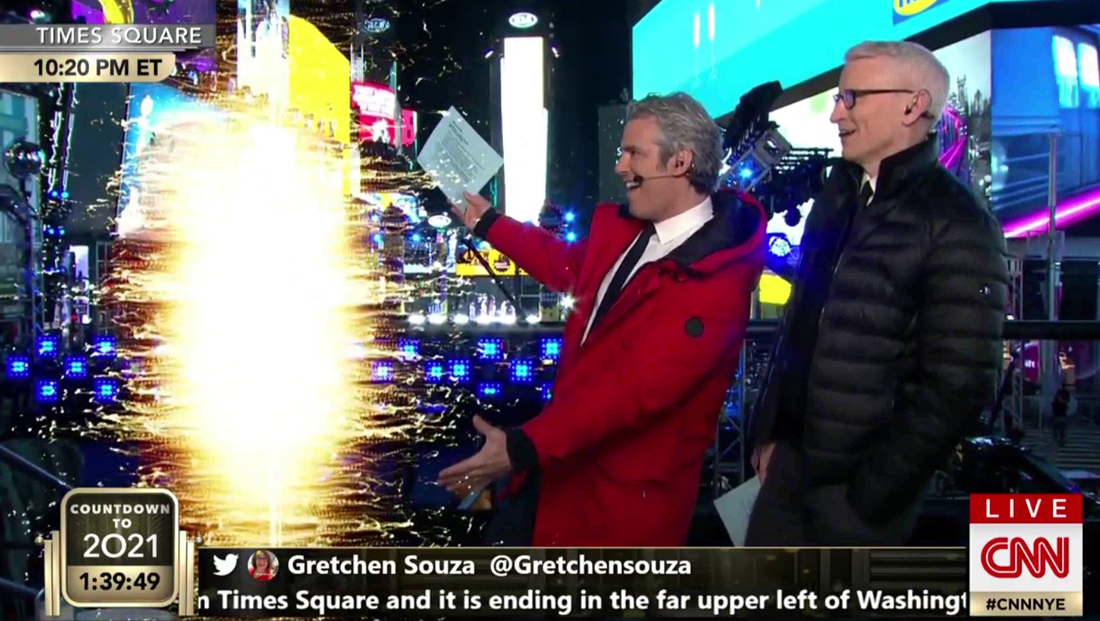 In a move reminiscent of its 2008 attempts at election night “holograms,” CNN used a visual effect to “beam in” actor and comedian Leslie Jordan from the west coast to the Times Square riser where New Year’s Eve hosts Anderson Cooper and Andy Cohen were stationed.

The effect, complete with a “Star Trek”-like burst of light, allowed Jordan — satellite delay and all — to appear to be having a rather stilted conversation with the CNN hosts.

The effect appeared to leverage a nearly full body shot of Jordan turned to make it appear he was facing Cooper and Cohen as well as a tight one shot of him.

Notably, Jordan’s image had a slightly different appearance between each shot, mainly in what appeared to be lighting or camera settings.

The effect could have essentially been created by stationing Jordan against a key wall with two cameras pointed at him.

For the three shot with Cooper and Cohen, the key wall was removed and his image could have been inserted over the camera feed from Times Square (the camera zoomed out to leave an “empty” space for him).

Likewise, his one shot likely was a separate camera with the key wall removed in favor of a Times Square view.

It’s worth noting that, just like CNN’s so-called holograms of 2008 infamy, neither effect is actually a true iteration of the technology and could perhaps be more accurately described as simply inserting an isolated image of talent into a real environment in different location.

CNN’s 2008 iteration did include 35 cameras surrounding its standup location in Chicago, giving it the ability to, combined with on camera moves, make the person’s image appear to be “3D” — rather than the locked down shots that appeared to be used on NYE 2020.

When Jordan first appeared, Cohen proclaimed excitedly that “It’s gay ‘Star Trek'” before Jordan joked he wanted to break out into “We Three Queens of Orient Are.”

All three of the men are openly gay.