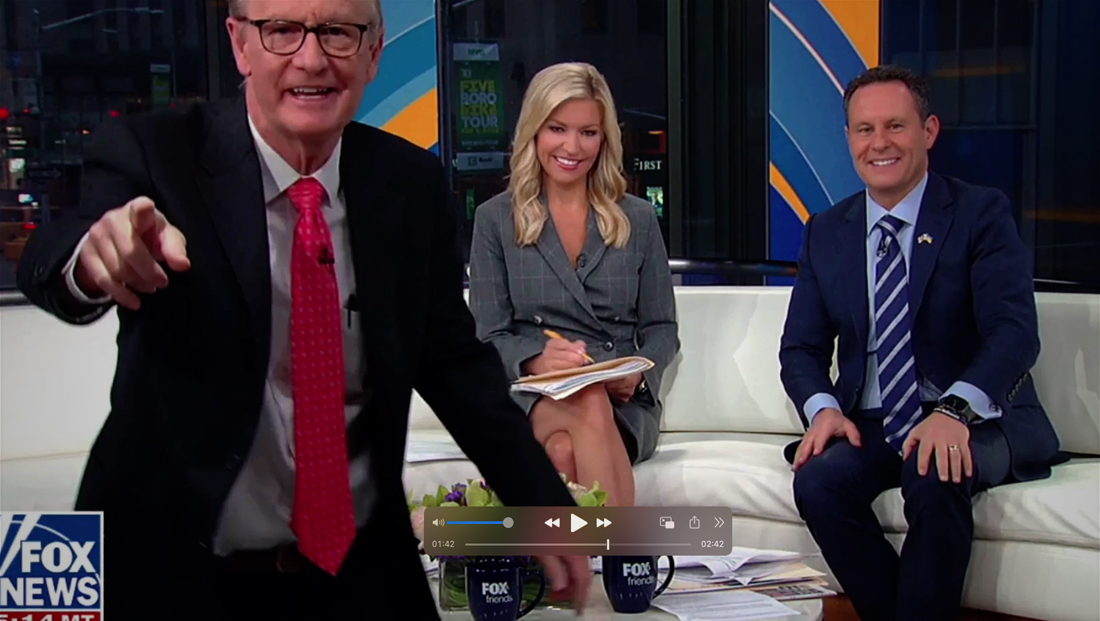 “Fox & Friends” had a field day Friday, April 1, 2022, after President Joe Biden inadvertently said that solar power could save the average American family $500 per month (instead “per year”) — so much so that its hosts neglected a key part of their jobs by going nearly three minutes over the segment’s allotted runtime while joking the network could just show “one less pillow commercial.”

There’s no doubt that Biden said the incorrect figure — and the White House later released a revised transcript of the speech with the word “month” in strikethrough and replaced it with “year,” correctly the calculation to an average savings of $500 per year.

Co-host Steve Doocy, whose son happens to be the network’s personality assigned to the White House, did concede that the error could have been a “Ron Burgundy question mark”-type error in that the wrong text was typed into the teleprompter, which the network was quick to point out Biden was using, something it likes to do frequently presumably to question his cognitive abilities.

Doocy even admitted that Fox and its hosts have fallen prey to that type of error — just like just about any broadcaster has.

Co-host Brian Kilmeade noted that he prefers to have numbers spelled out on the prompter — which is common practice in TV news scripts.

For example, instead of “$500,” most TV networks and stations would have written it out as “FIVE-HUNDRED DOLLARS” on the script and prompter.

This type of formatting can be particularly helpful when dealing with the oddity that the dollar sign comes before the number when expressing U.S. currency, which, following strict reading rules, should be read as “dollars five hundred” or “dollar sign five hundred.”

That said, writing out “FIVE-HUNDRED DOLLARS PER YEAR” as opposed to “$500 PER YEAR” perhaps wouldn’t have prevented the issue since the crux of Biden’s flub was the word “month” instead of “year” unless having the confusion over where the dollar sign was placed slipped Biden up, who has been open about his struggle with stuttering.

Doocy even requested a camera be turned around to point at the teleprompter of another camera to try to showcase what it looks like, though the outcue time of 12:30 (meaning 12 minutes, 30 seconds past the hour), was written as numerals, as is typical with “stage direction” type content in prompters — so it didn’t really prove the point.

All of this ended up eating up around two minutes and 40 seconds of time, as Doocy himself pointed out — which is an eternity in TV news and any host worth their salt arguably should have been able to wrap a segment much sooner than that.

After losing that time, Kilmeade joked that the network could “do one less pillow commercial,” apparently referring to the MyPillow commercials from conspiracy theorist and Trump surrogate Mike Lindell, who advertisers heavily on the network but is also, along with Fox, facing massive lawsuits over claims about voter fraud that never happened.

In reality, the network would have had to cut about six 30-second ad slots to make up for the lost time.

Recent reporting has noted, however, that while Fox does rake in millions in advertising revenue a year, the network pulls in about $1.8 billion a year that pay TV providers have to pay it just for the privilege of carrying the network. That reportedly comes out to about $2 per subscriber, though that figure could vary based on the provider’s individual contract.

Fox leadership has hinted that it may be seeking higher carriage fees as a good chunk of its contracts with pay TV providers start expiring over the next few years.

After all of that fuss, the team then tossed to Ashley Strohmier for a summary of the day’s headlines — nearly three minutes late, likely meaning the network needed to kill an upcoming segment or make other adjustments to the show or ad timing.

The irony of the network poking fun at Biden, effectively feeding into the “sleepy Joe” or alleged “senility” of the president, while its own hosts, who have been on the air for decades, couldn’t wrap a segment on time, is a bit ironic, especially given it was at the expense of one of the network’s common political targets.

The TV news industry is full of stories of producers getting reprimanded and even fired for having shows run just a few seconds over — and it was likely a producer who ended up having to clean up most of the mess and shuffle things around to get the program to end on time.