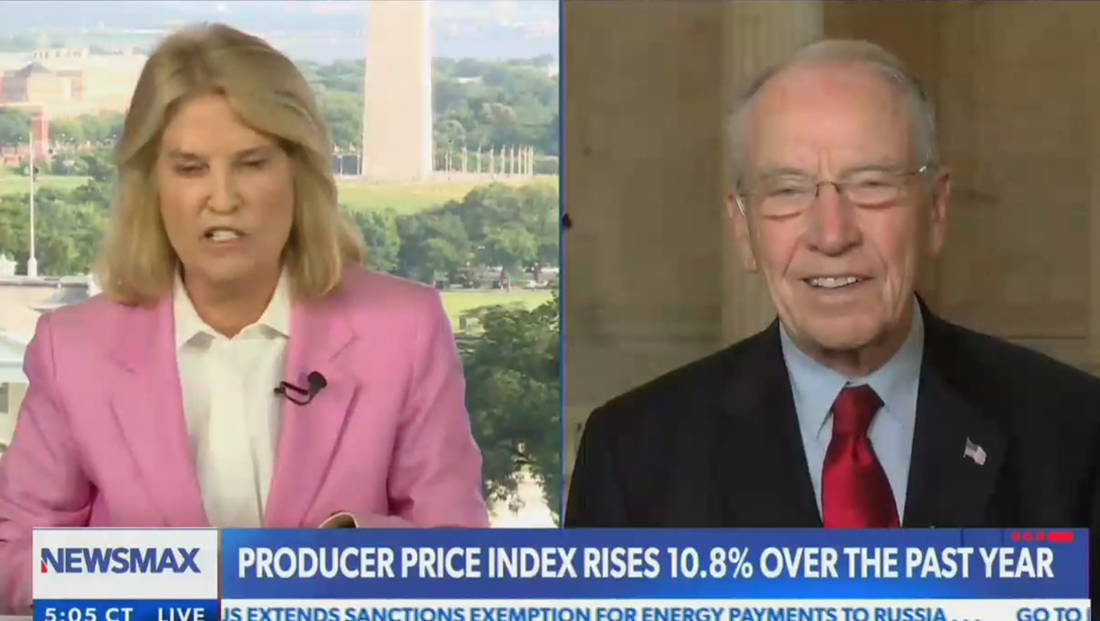 Van Susteren, who was announced in May 2022 as the host of “The Record” on the channel, attempted to start an interview with Grassley, who was appearing live from inside the Capitol.

She set up the interview with a layered question for Grassley about the possibility of bipartisan solutions for inflation its effect on the economy and then stopped, waiting for his response.

“You’ll have to come through clearer than you have so far. I couldn’t make out what you’re saying,” was Grassley’s response, however. He could also be seen attempting to adjust his IFB.

Van Susteren asked the question again but in a significantly abbreviated way.

No dice. Grassley responded by saying he still couldn’t hear her — calling her audio “muffled.” During the exchange, Grassley’s voice also sounded echoed, which could be a strong indicator of technical problems.

“… this is our first night on and as you can imagine, we apparently have some gremlins in the system,” Van Susteren said before attempting to ask Grassley for “any sort of thought” on food prices.

“If you’re still trying to interview me, I can’t make out what you’re saying,” was the response.

Newsmax's new primetime lineup had an…awkward start – "If you're still trying to interview me, I can't make out what you're saying" pic.twitter.com/wBUelbDSz0

Van Susteren finally gave up on the interview and let viewers know her team would attempt to resolve the issue. Other segments before and following the interview did not appear to have any obvious technical issues and the show eventually circled back once the issue was resolved off-camera.

Van Susteren was hosting from Studio A inside of Celebro Studio’s Washington, D.C. facility that is rented out to various media organizations and productions.

The facility is located just north of the White House on I Street Northwest. Studio A features an anchor desk and is backed with multiple video panels that make it possible for clients to brand the space as they need. Additional LED panels are on the front of the desk.

Van Susteren was also seated in front of a large video panel displaying what appeared to be a live feed from one of the locked down cameras Celebro has trained on the White House and made available to both studio rental clients and outlets all over the world who pay to use the shot.

Audio issues with remote setups are probably one of the most common type of technical problems in TV news. Often audio has to be piped through multiple systems and be linked correctly between the studio and remote location.

Grassley appeared to be standing inside of a small, ancillary rotunda inside the Capitol that is a common location for standups across broadcast and cable networks. The area includes significant technical infrastructure to make these live shots possible, though this also likely meant that Newsmax had to route its audio through a third-party system, adding another potential point of failure.

The fact Van Susteren was originating from a third party facility could have also added another layer for “gremlins” to cause issues.

In reality, remote interviews like these are actually harder to pull off successfully than they look.

Interviewees have to remember that staring straight into the lens looks best — rather than looking at any off-camera return or preview monitors that might be available to them. It’s common for first-time or novice interviewees to constantly glance at a monitor, especially when being asked a question.

However, as an experience senator, Grassley appeared to be well acquainted with these types of setups.

In most setups like this, interviewees rely on earpieces to hear the questions being asked back in the studio because having them listen to the audio on, for example, a television in the room, could cause audio feedback issues. The production team can also typically communicate with guests this way.