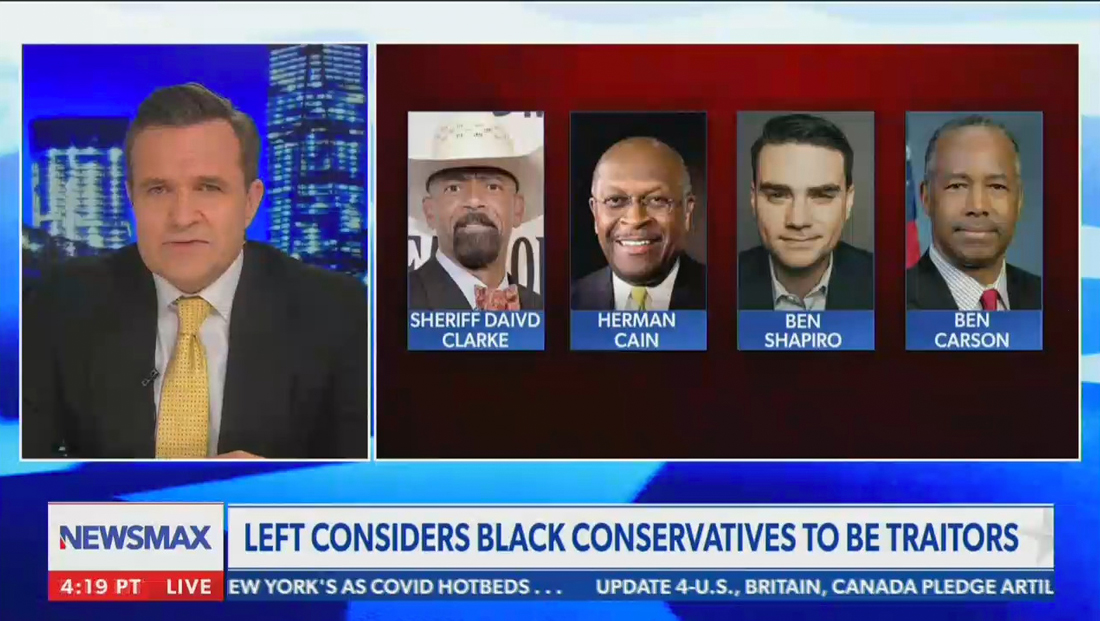 Ultra right-wing network Newsmax aired a segment surrounding its allegation that the “left considers Black conservatives to be traitors” with a puzzling graphic appearing on-screen.

According to multiple sources, Shapiro’s family comes from Russian-Jewish and Lithuanian-Jewish lineage — which would decidedly not classify him as being Black by almost any definition.

Perhaps Newsmax meant to suggest that Shapiro is considered a “traitor” (its word) by the left because he identifies as Jewish, a group that has been marginalized throughout history and still faces anti-Semitism today.

Shapiro’s wife, Mor, descended from Moroccan Jews, but was born in Israel. Moroccan Jews largely immigrated to the African country from Spain and Portugal in the 1490s, but most ended up migrating back to Israel. It does not appear Shapiro’s wife identifies as Black.

Either way, if she did, it would probably have been more appropriate to feature her photo on the graphic, rather than her admittedly more well-known husband, though that shines the light on the fact that Newsmax did not include any Black women conservatives in its graphic.

This is an actual screenshot from Newsmax. I did not edit this. pic.twitter.com/zTevhmwMAH

It’s also worth noting that Herman Cain died in July 2020 from complications regarding COVID-19, though that doesn’t necessarily preclude him from being shown on this graphic.

Cain attended a Tulsa, Oklahoma, rally for Donald Trump June 20, 2020, without a mask — he was a vocal critic of mask mandates.

He tested positive for COVID-19 nine days later and was hospitalized in Atlanta.

Aides pointed out that Cain had traveled extensively in the days before his diagnosis, so it was not clear where he contracted the illness, though the Tulsa rally was connected to several high profile cases of COVID-19.

In the 30 days following the rally, the state’s case count tripled, though it’s not clear how many could be traced back to the rally.