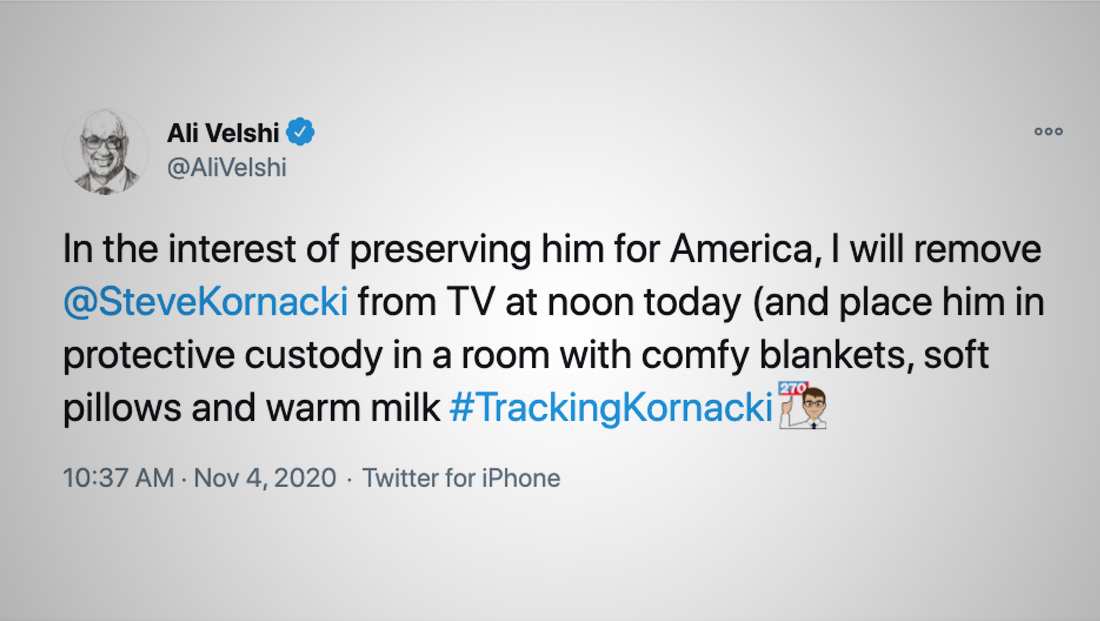 NBC’s data wiz Steve Kornacki has his own Twitter “hashflag” emoji that is triggered by the hashtag “#TrackingKornacki.”

Hashflags are small images Twitter inserts through its own backend code next to one or more hashtags and often during a set period of time.

They differ from emojis, despite their relatively similar appearance, in that they are custom drawn and will generally appear next to any Twitter user (or at least ones in certain regions) who use the hashtag.

Emojis, on the other hand are much more globally compatible, typically being supported in most languages and text formats.

Because hashflags are exclusive to Twitter, they do not work on other social media platforms.

Kornacki’s hashtag shows a bespectacled version of him in shirtsleeves holding a “270” placard.

Twitter has two distinct categories of hashflags — some the companies trigger itself to mark current holidays, major events and even social movements. Since Twitter generally implements these on their end, there’s no cost.

Meanwhile, Twitter also sells the ability to have one or more hashtag get a hashflag. Reports indicate the cost ranges from a few hundred thousand dollars to upwards of $1 million, depending on a variety of factors.

Hashflags are also unique in that the images only appear next to hashtags for a set period of time. For example, an “#ElectionDay” star hashflag image is active in the weeks leading up to and proceeding U.S. elections but then typically will disappear (this applies to paid ones too — presumably unless the company forking over the money shells out even more).

While the hashtag (such as #TrackingKornacki) will remain in the tweet unless it’s deleted completely, the hashflag image will disappear on the company’s deal with Twitter expires.

It’s not immediately clear if NBC paid for Kornacki’s hashflag, but we’ve reached out to the network for comment.