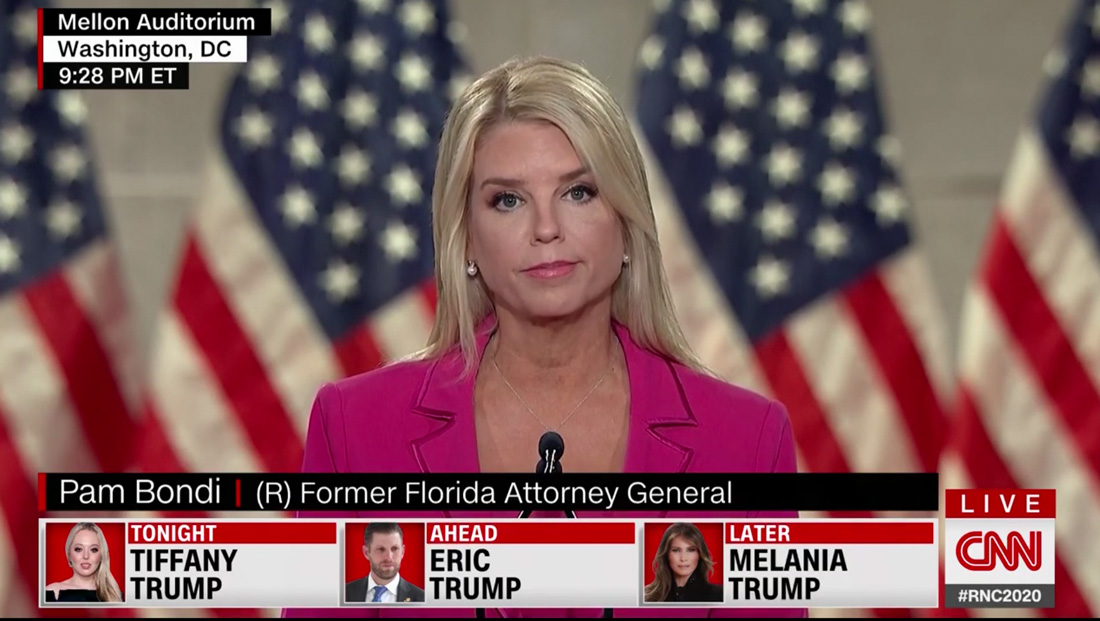 Former Florida Attorney General Pam Bondi spoke during the second night of the Republican National Convention Aug. 25, 2020 and accused Joe Biden of favoring his family members — even as CNN’s screen was filled with a lineup showing three upcoming speakers all with the last name of “Trump.”

Bondi brought up a popular GOP talking points centered around how Biden’s son Hunter Biden benefited from his father’s influence — claims which have been investigated and proven unfounded, though continue to circulate as conspiracy theories and memes.

CNN, which like most other cable news networks, was carrying the feed live, has been airing a “rundown” style graphic showing upcoming speakers for much of its live coverage of both conventions.

So, as Bondi blamed the Biden family for nepotism, the CNN banner carried images of Donald Trump’s daughter Tiffany Trump and son Eric Trump, the latter of whom runs his father’s company. Also included was Trump’s wife, Melania Trump.

While CNN was running the rundown for much of the evening, the graphic notably changed to including the three Trumps right around the time Bondi began her attacks on the Biden family.

At other times, the graphic would include a “now” element highlighting the current speaker, which would have included Bondi, as well as “tonight,” “ahead” or “later” elements. Had Bondi been included, the three column layout would have been forced to remove at least one Trump.

An alternative layout of the graphic featured the network’s RNC branding alongside a preview of an upcoming speaker arranged in two columns.

Trump Jr. works for his father’s company and campaign and also appeared on NBC’s “The Apprentice” alongside his dad. Ivanka Trump and husband Jared Kushner both serve as advisers to Trump in the White House, though neither take a salary for these roles.

Despite not being a Trump family member, Bondi herself is no stranger to allegedly benefiting from Trump’s influence.

As attorney general, she notably dropped an investigation into Trump University after the Trump Foundation made a $25,000 donation to her campaign via a PAC.