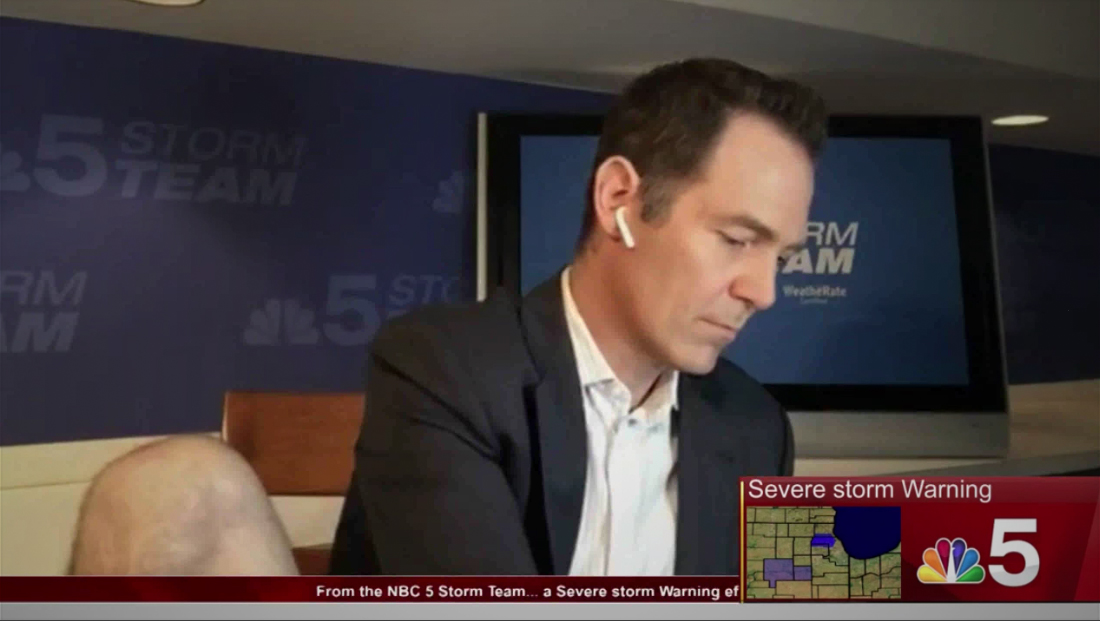 A Chicago meteorologist fell victim to what was probably inevitable with so many TV personalities broadcasting from home — being caught on air not wearing suit pants.

The station had just dropped out of live coverage of the White House coronavirus press briefing in favor of severe weather in the region and anchor Patrick Fazio tossed to Deanno, who, like most of the station’s meteorologists, has been working from home for several weeks due to the outbreak.

Deanno, who was wearing a pair of wireless ear buds, appeared on screen apparently working away at his computer and unaware he was on air.

He appeared to been sitting with his leg bent and foot up on a chair, giving viewers a look at his uncovered knee and leg.

After about 10 seconds of dead air, Deanno reached up and apparently turned off his camera, with a fullscreen Dejero slate appearing on air with the label “Output 1” appeared for a few seconds before the station cut back to Fazio, who appeared to be a bit flustered as he tossed to break.

Dejero is a company that works with broadcasters and other businesses to provide video and data transmission services.

Earlier in the same newscast, the station’s on screen temperature bug indicated it was 63 degrees in the region, though it was steadily getting colder thanks to the storm in question.

Even under normal working conditions, it’s not uncommon for TV personalities to not wear matching pants in the name of comfort, especially if they spend most of the newscast behind an anchor desk, although standing presentation styles have made it a bit more difficult to get away with wearing shorts or jeans instead of dress or suit pants.

It’s even more common on weekends when the mood is a bit more relaxed and camera work is sometimes more restricted to only the upper torso and face of on air personalities.

Some anchors will also come to work in more comfortable clothing and change before going on air.