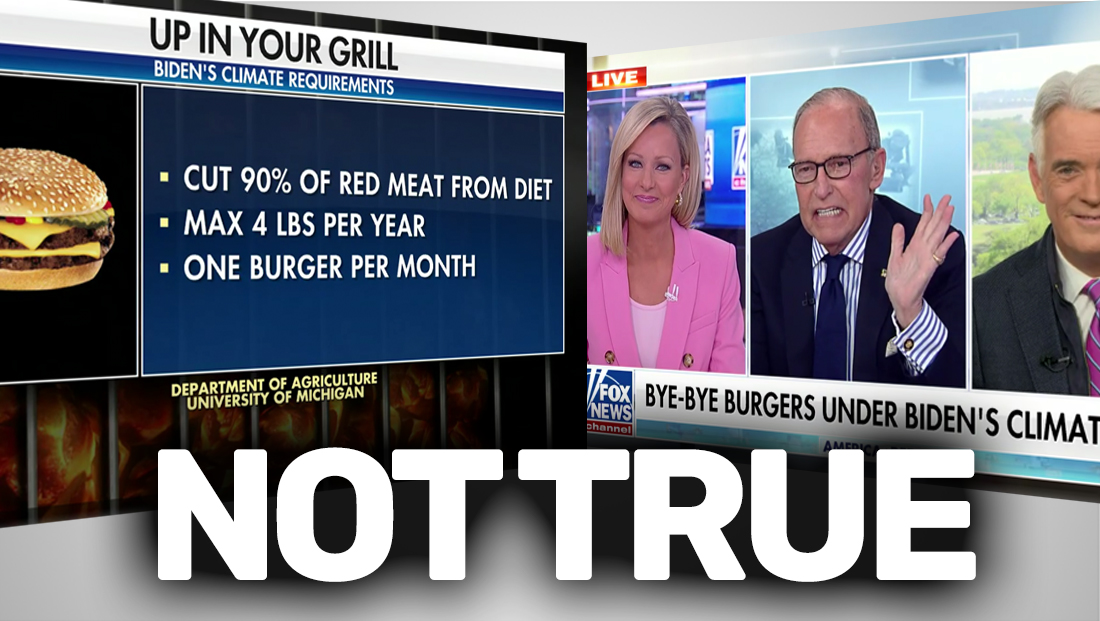 Fox’s right leaning commentary channel was forced to make an on air clarification after incorrectly claiming that President Joe Biden’s climate plan would require Americans to cut back on eating red meat.

The whole thing started with a Daily Mail report that implied the same claim. In a story headlined “How Biden’s climate plan could limit you to eat just one burger a month,” the publication used that subtle yet likely widely overlooked qualifier of “could” to make the title of the story technically correct (but still just as clickbait-y).

The Daily Mail’s digital version of the story also included an infographic titled “What will be required to meet Joe’s green targets” followed by “Cut 90% of red meat out of diet; only eat 4lbs a year.”

The root of the Daily Mail’s story is a University of Michigan study (which the Daily Mail incorrectly called “Michigan University”) that showed cutting back on red meat could benefit the environment.

The methodology and findings of the study are likely debatable by those who have extensive knowledge in food production and climate change, but that’s irrelevant in the claim that this is Biden’s plan because the study has never been linked to Biden or his plans.

While the University of Michigan study does, as both Fox and the Daily Mail reported, illustrate a link between the consumption of red meat and the earth’s climate, there is no direct evidence the study was ever even viewed by the Biden administration, let alone being an official recommendation. No one in the Biden administration has ever officially cited or mentioned the study, much less suggested it should be taken at face value and its suggestions implemented.

Fox gleefully reported on the story on the Friday, April 23, 2021, edition of “America Reports” and had former CNBC personality turned Donald Trump official turned Fox host Larry Kudlow on to discuss the “plan.”

Kudlow and co-hosts John Roberts and Sandra Smith spent much of the segment smirking and making cracks about the wild claim linking Biden to the study.

Interestingly, Kudlow admitted right off the top that he only eats beef about once a year before going on a rant that lead to him suggesting Biden wants Americans to eat Brussels sprouts for the Fourth of July (a possible dig at the president’s previous announcement that the holiday may be able to be celebrated safely outdoors thanks to ongoing coronavirus mitigation efforts).

Meanwhile, the network aired a graphic headed “Up in your grill” with the subtitle “Biden’s climate requirements” and listing the false claim about cutting 90% of red meat out of the American diet.

By doing so, Fox directly implied that the red meat claim was, in fact, a “requirement” of the Biden plan.

By Monday, April 26, 2021, Fox host John Roberts was back on air reading a clarification.

“On Friday, we told you about a study from the University of Michigan to give some perspective on President Biden’s ambitious climate change goals,” he said.

“That research from 2020 found that cutting back how much red meat people eat would have a drastic impact on harmful greenhouse gas emissions. The data was accurate but a graphic and the script incorrectly implied it was part of Biden’s plan for dealing with climate change. That is not the case,” he added before moving on.

Many are viewing that as a slick way to avoid much, if any, responsibility for the gaffe, especially the claim the graphic was only to “give some perspective” when it clearly was labeled as being part of the actual Biden plan.

It’s not clear who made the call to use the graphic but it appears, at best, to be a case of sloppy broadcasting without verifying and clarifying facts from another outlet.

It also could be argued the damage has been done — the claim quickly went viral, with the graphic shared across social media and conservative media. Few people appear to have taken the time to fact check the claim and the graphic became in indelible part of conservative voices, including screen shots of it being shared or reposted by Donald Trump Jr. and multiple fellow Republicans on social media.

All this comes after a wide range of media outlets from all sides of the political spectrum have taken noted that Biden’s announcement was scant on much detail about how the goals will be accomplished.

Announcements being announcements, it’s not necessarily fair to judge whatever plan is formulated (that will likely need input from a variety of experts and political maneuvering to become reality) based solely on an initial one.

Studies on a wide variety of subjects are published every day and often garner big headlines and memes for the “findings” that are often either taken out of context or stated as pure, overarching truths, when, by definition, studies only look at a portion of the population.

Fox also reported, apparently without doing much of its own reporting, on a New York Post report (which happens to be its corporate cousin owned by conservative mogul Rupert Murdoch) that “thousands” of Vice President Kamala Harris’ books were given away to migrant children at a shelter.

That claim was later completely dispelled and has died down.