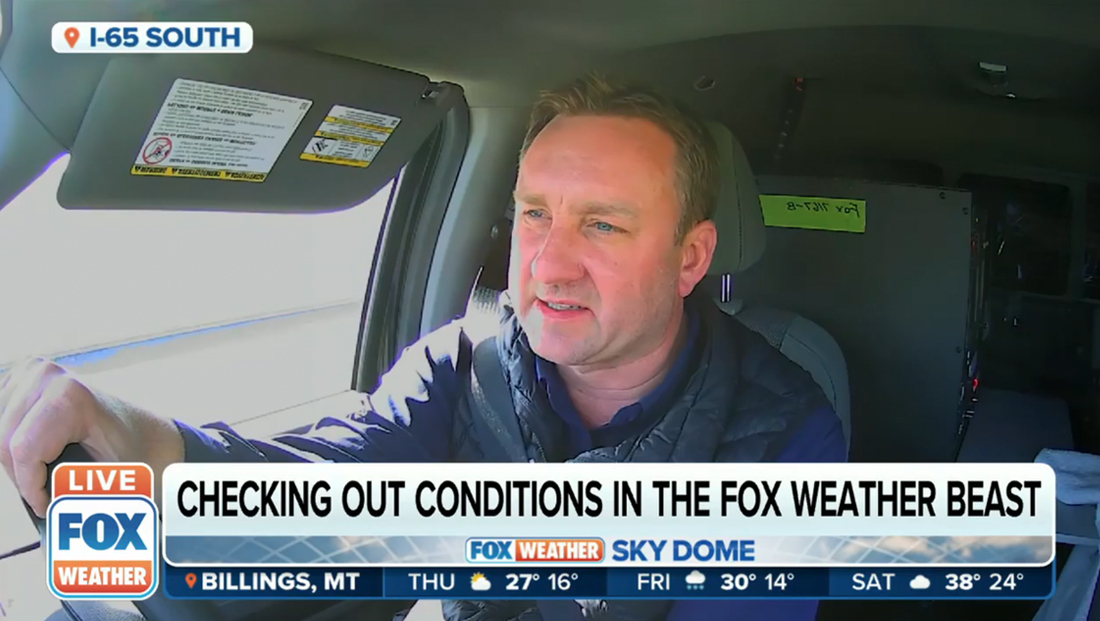 After Fox Weather began deploying its “Beast” mobile reporting vehicles, the network was eager to start showing them off during the week of April 11, 2022 — including having the vehicles parked behind reports promoting the upcoming USFL games its parent network is airing — but one use of the fleet brought the notion of “don’t go live and drive” to mind.

On Thursday, April 14, 2022, during “Sky Dome,” the multimedia journalist Robert Ray joined the show live while driving one of the vehicles down Interstate 65, near Bowling Green, Kentucky.

The area had experienced severe weather in the days prior to Ray’s drive, but it had since cleared up and he was not driving during severe weather, though the network did air footage from the previous day ahead of and during his live report when the video signal appeared to drop out.

Of course, it’s questionable how safe it is for Fox to be having reporters go live while driving the vehicle they are in, though it’s arguably akin to driving while talking on a hands-free device (albeit a video-equipped version).

However, there has been research that says that even doing this can still be highly distracting for drivers and more likely to cause accidents, though it can be safer than a driver holding a device up to his or her ear.

To his credit, Ray appeared to keep his eyes mostly on the road during his report, rather than attempting to dart back and forth between the windshield and lens.

That said, it seems a bit risky for Fox to be opting to do this from the potential insurance and liability risks alone — and the fact that any accident occurring during a live shot would, by definition, be documented live on the air and essentially be evidence of alleged distracted driving.

It’s probably fairly unlikely to be an issue, but there’s always the risk. Of course, having a separate driver wouldn’t guarantee the vehicle would never cause an accident.

All told, springing for a dedicated driver could be a wise investment compared to the risks, especially if lives could be on the line.

The idea of mobile weather vehicles and live feeds from the road from them is not new — though stations typically send a driver along to operate the vehicle while the reporter goes live. Depending on the configuration, the vehicle can even have a driver, camera operator-technician and reporter — for a total of three people in the vehicle.

In other cases, vehicles simply drive around local roadways to showcase current driving conditions with a fixed camera capturing the action with the drive not appearing on screen.

It’s also worth noting that while Ray appears to be sitting on the wrong side of the vehicle for driving in the U.S., closer examination shows that the video is being shown as a mirror image, similar to the way many cameras take selfies.

This is evident thanks to a yellow piece of tape on a box behind him that appears to read “Fox 7167-8 (or B)” is clearly a mirror image, as is the text on the manufacturer’s warnings on the sun visor to the left side of the screen.