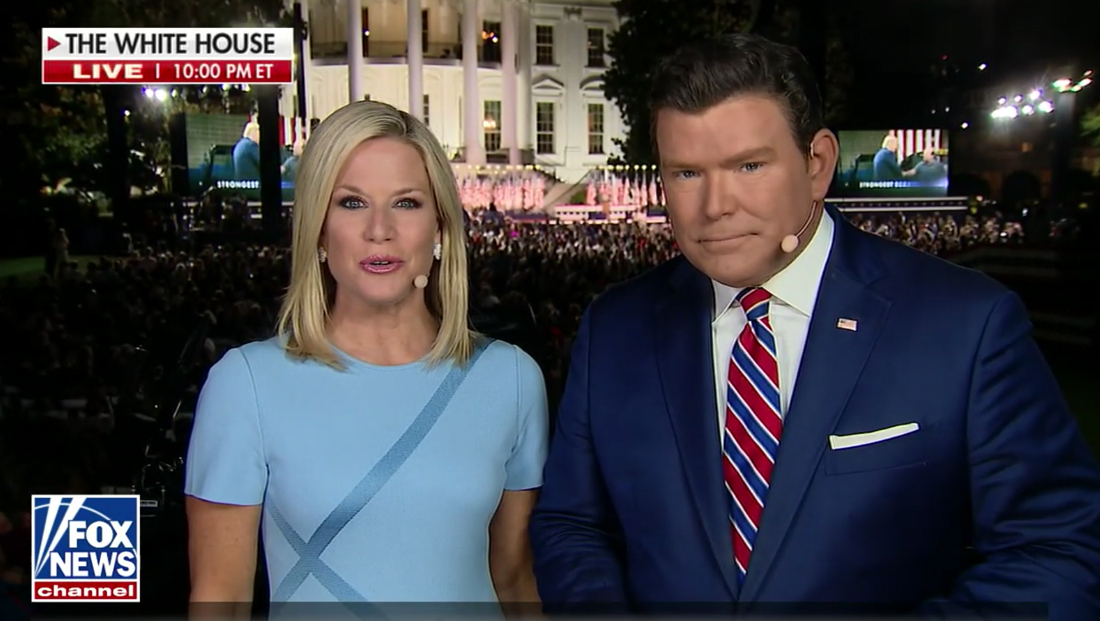 The pair appeared on air standing on the south lawn of the White House standing — quite literally — shoulder to shoulder, with almost no gap between them despite the ongoing coronavirus pandemic and guidelines that call for social distancing or face coverings in public.

MacCallum and Baier were broadcasting outdoors, which some indicate reduces the need for social distancing, though other experts say it’s not ideal to do this for longer periods of time.

Many broadcast networks and local stations, including Fox, have been placing talent, in different areas of the studio, from remote locations such as their homes or seated farther apart than normal to encourage social distancing.

Meanwhile, in the background, a crowd of about 1,500 gathered and sat on white chairs there were not socially distanced. Shots of spectators aired across all networks showed a handful of people wearing face coverings.

The Trump campaign said that “appropriate” precautions were taken — which could have ranged from “self certifying” and temperature checks — something that Fox could have done with its crew and hosts as well.

The network, which was reportedly granted “special” access to the White House grounds and other RNC sites before complaints from news organizations resulted in opening areas to more members of the press, broadcast its coverage with its hosts live on the south lawn of the White House.

While other networks had live shot presences on the lawn, only Fox hosted the entire show from there. It had been broadcasting from the roof of the Chamber of Commerce building with viewers overlooking the White House for coverage of both conventions.

During this coverage, the duo were also seated closer than the typical six foot minimum recommended, though this setup was also outdoors.

Live shot locations are notoriously tight areas, especially when done from temporary setups like the ones used Aug. 27. It wasn’t uncommon, at least on a pre-coronavirus world, to see talent from different networks or stations standing just feet apart, with the tight camera framing the only thing from revealing just how close they are to others.

That said, many such areas created since the pandemic began have accounted for more generous spacing.

Major networks and news organizations maintain quasi-permanent live shot “booths” on the north lawn of the White House, which also include physical barriers between each space.