Fox ‘lightly’ trolls Biden during press conference with its banners 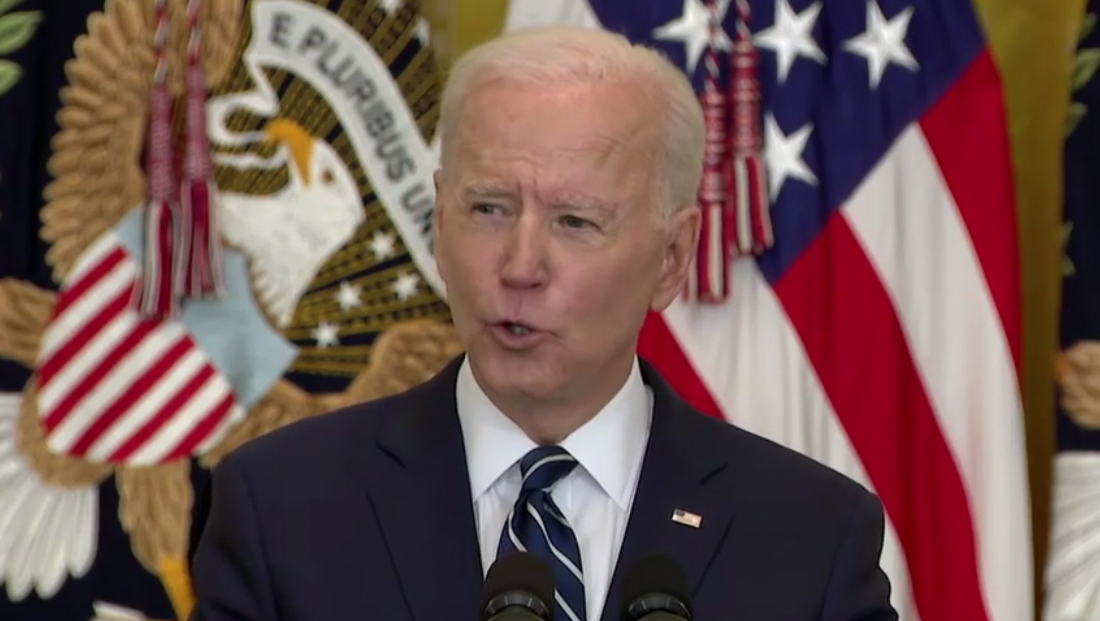 Fox’s right leaning commentary network didn’t go quite the level of snark it did during President Joe Biden’s first primetime address, but it did manage to get in a few zingers on its lower third banners. 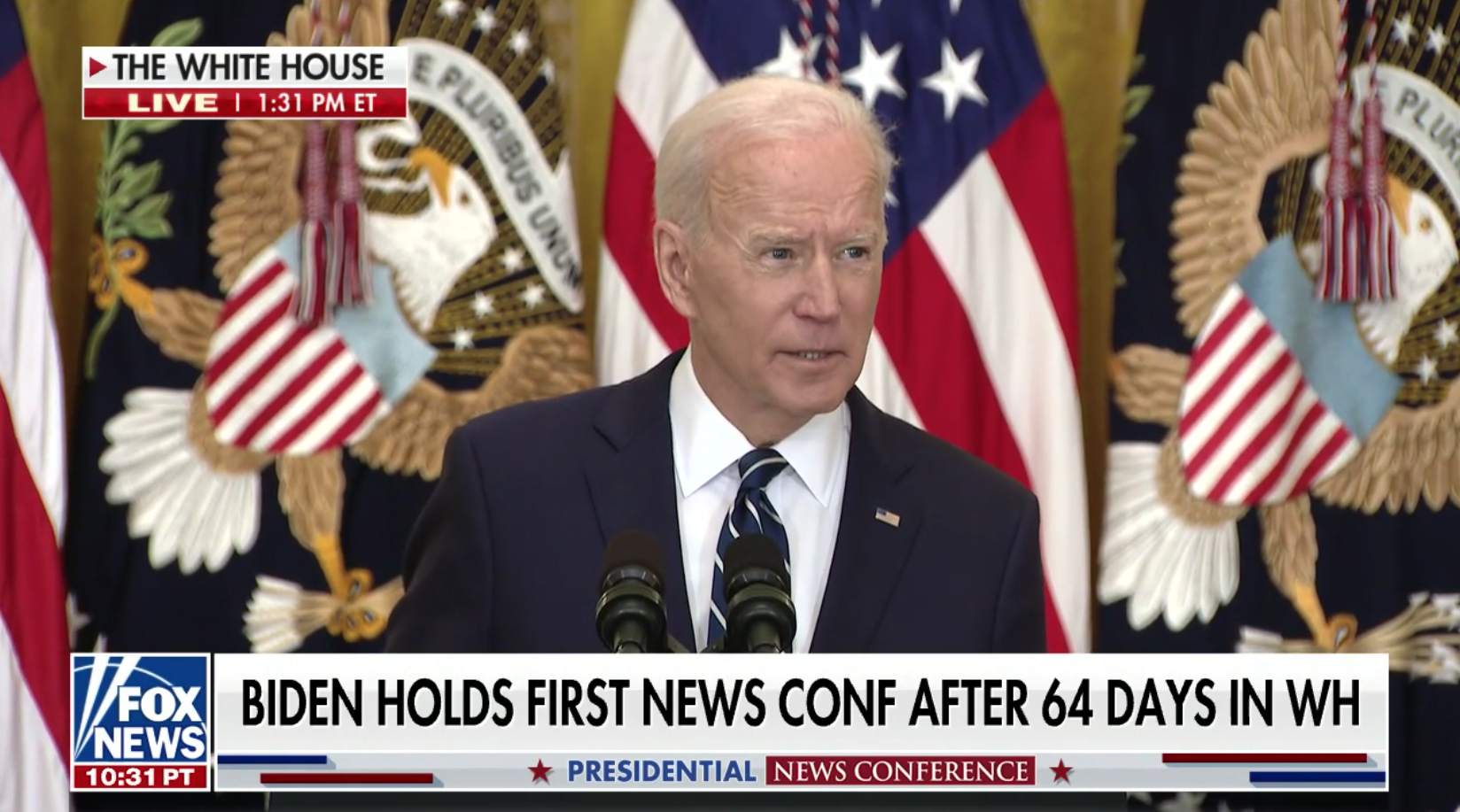 The “default” banner the network used most frequently during the event read “Biden holds first news conf after 64 days in WH” — a barely concealed jab at the fact that President Biden has gone longer into his term than any president in recent history before holding a formal press conference.

Fox and other right wing media outlets have made quite a spectacle of that number and mainstream media have also taken note.

ABC, NBC and CBS all made note of that fact at the top of their special reports, with CBS evening preparing a fullscreen graphic — but it was not a recurring theme throughout coverage.

Many conservative pundits, however, took things a step farther and used the delay as an opportunity to continue to surmise that Biden may somehow not be able to handle a live press conference that can allows for follow ups and tougher questions than more carefully planned press availability, which the White House has offered since he took office.

Some of this is an attempt to continue the “sleepy Joe” attacks generated by mostly right wing media, including Fox’s own hosts, and Biden’s own announcement that he, at 78, began suffering mild cognitive impairments even prior to the election. 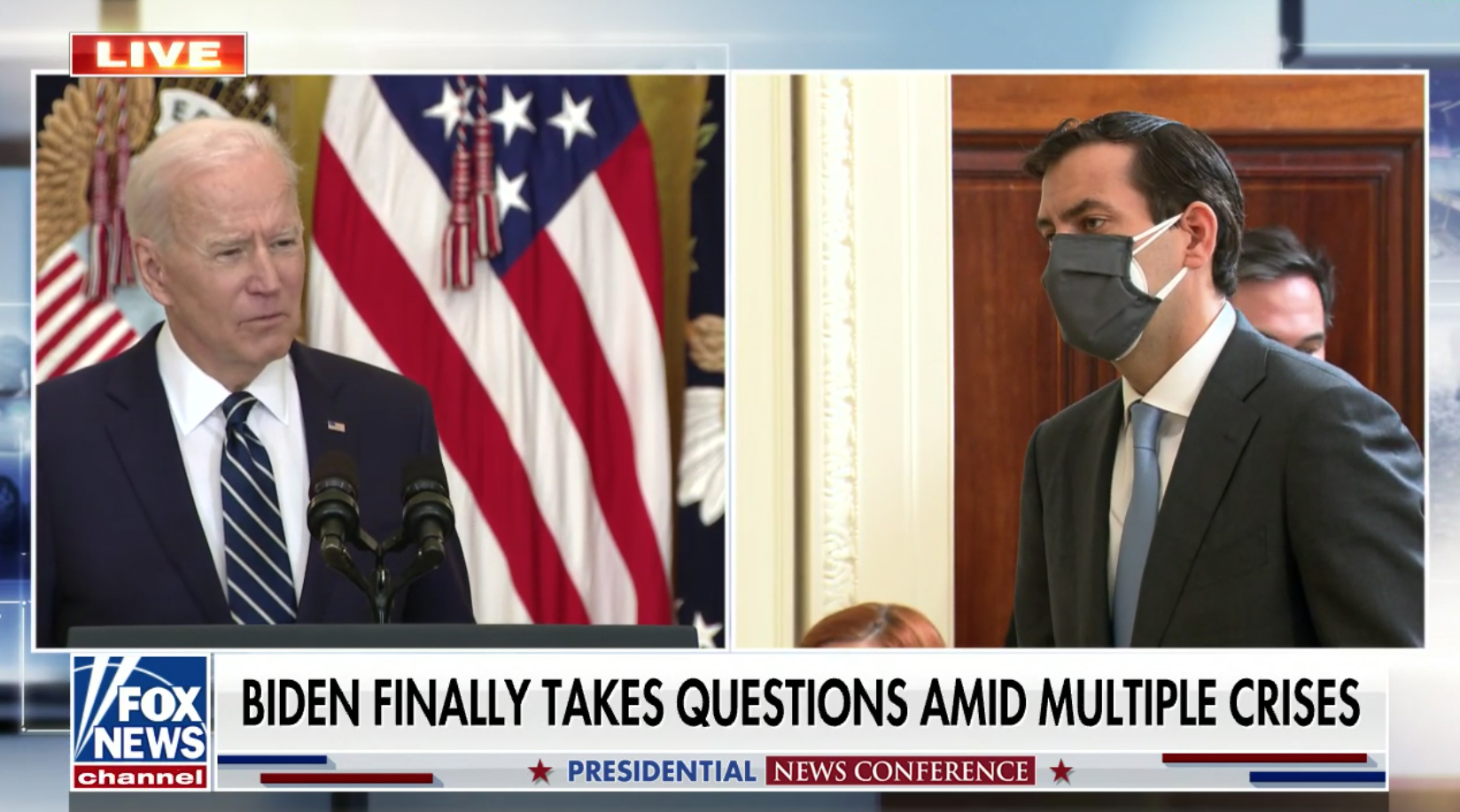 A similar banner read “Biden finally takes questions amid multiple crises” — note the use of “finally” that may as well been accompanied by a collective eye roll from Fox hosts and viewers. The references to “multiple crises,” while certainly true, is fairly obviously meant to suggest that not only is Biden responsible for the crises and has also been staying quiet about them. 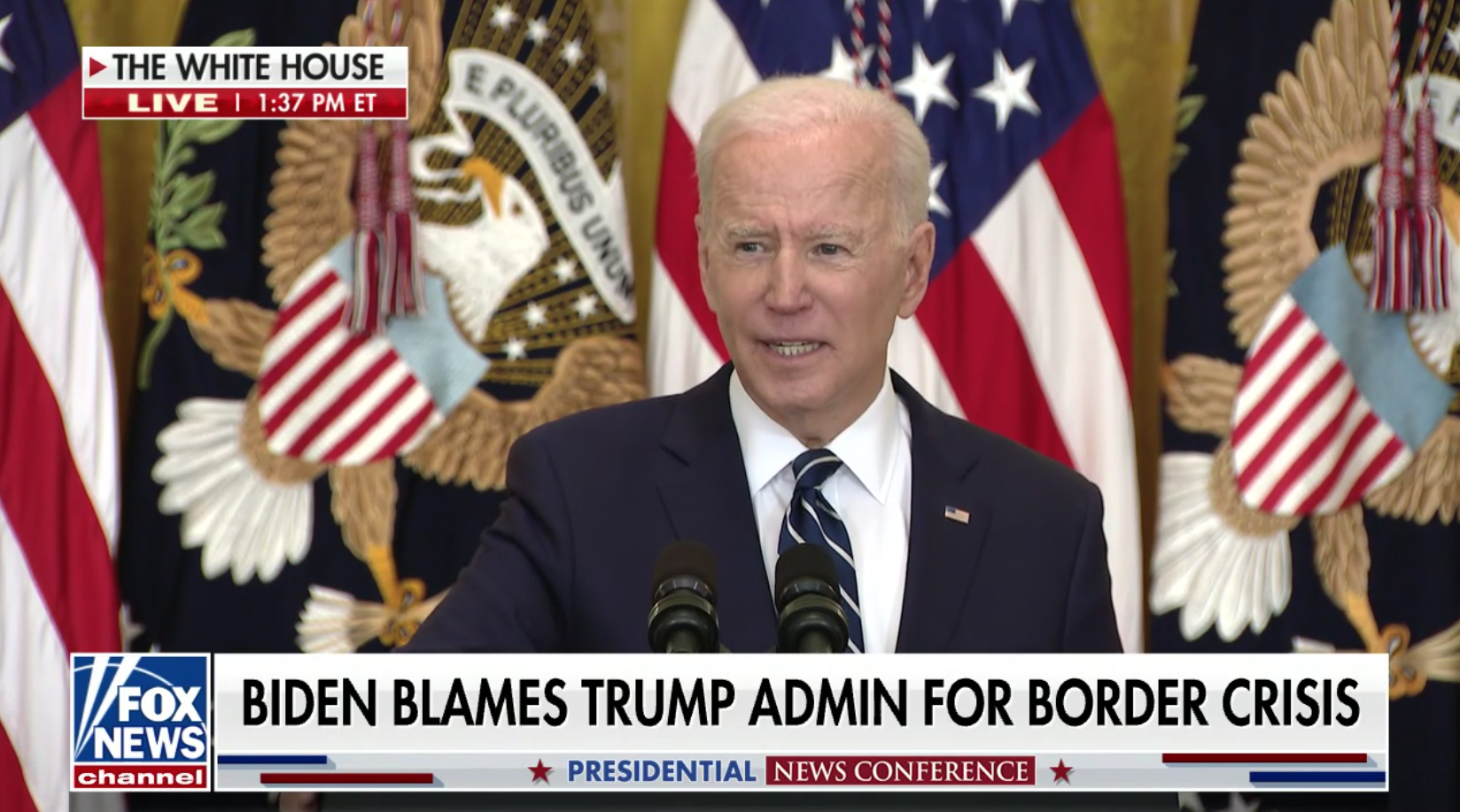 Fox also put up a banner reading “Biden blames Trump admin for border crisis” which does essentially reflect messaging from the White House and during this event, but the spirit in which it was delivered is accompanied by that same metaphorical eye roll. 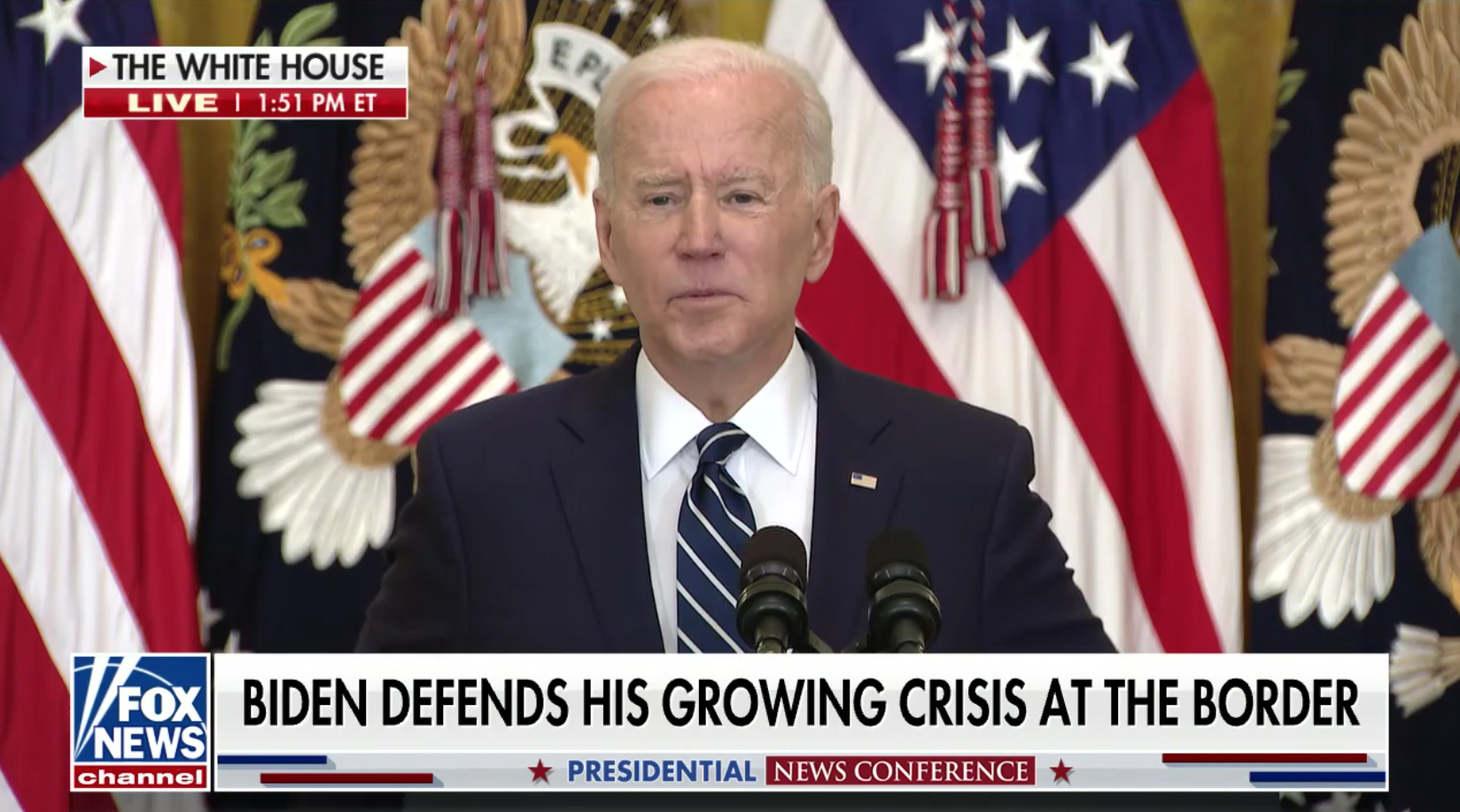 Apparently not willing to let Biden get away with pinning any responsibility on Trump, the network later popped up this zinger: “Biden defends his growing crisis at the border.” Just three letters: “H-I-S,” made a significant difference in the editorializing here. 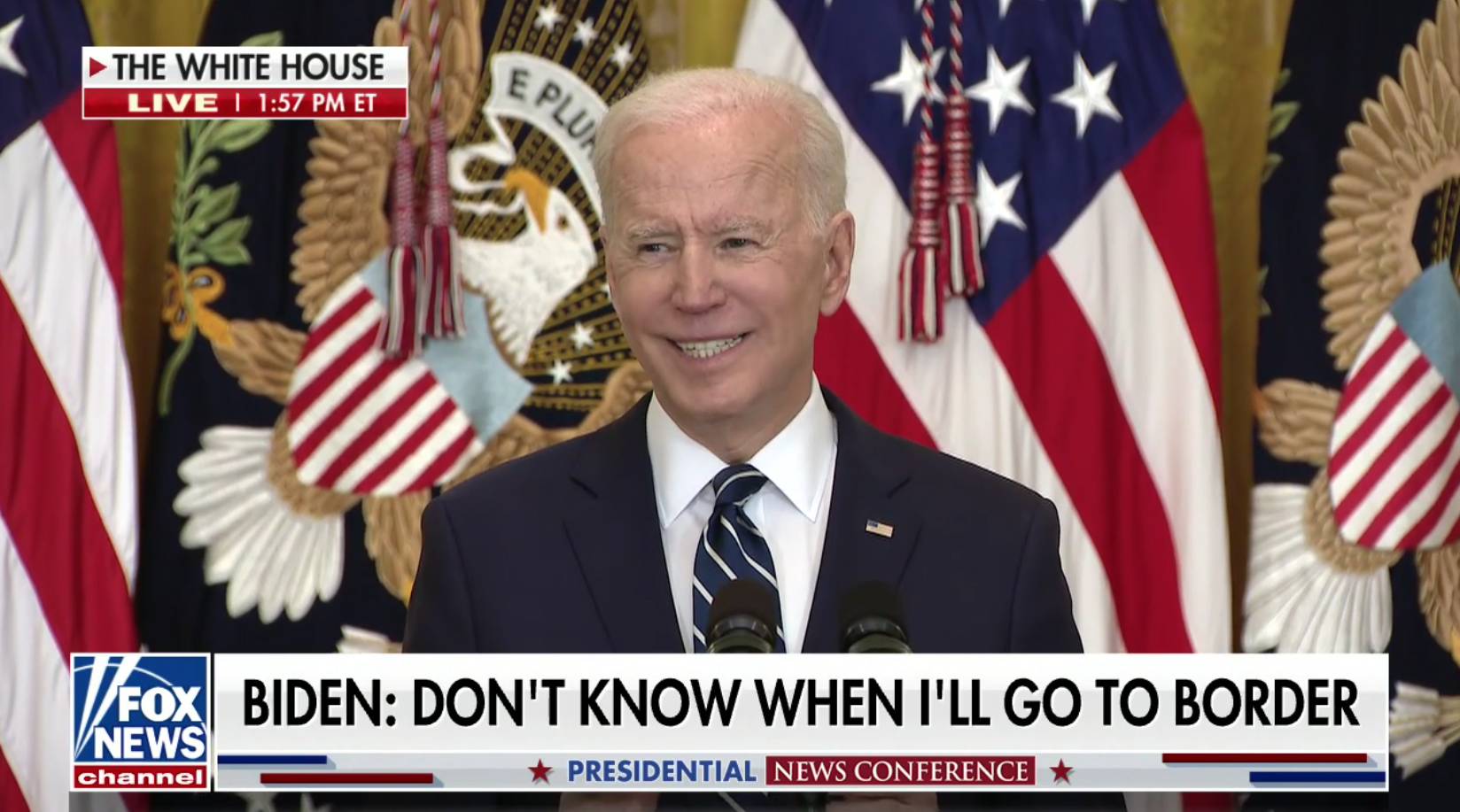 Fox then took glee in quoting Biden’s assertion that he doesn’t know when plans will be made to go to the U.S.-Mexico border with “Biden: Don’t know when I’ll go to the border.” Again, the barely concealed undercurrent here is that Biden not only doesn’t really seem to care about heading to the border but he’s also incapable of making any sort of plan or doesn’t know his own schedule.

In the commentary that followed the approximately one hour event, Fox repeatedly lamented that Peter Doocy, the son of “Fox & Friends” host Steve Doocy, the network’s 33-year-old newly installed White House correspondent, didn’t get a question in during the event.

At one point host Dana Perino even noted that “(former CNN White House correspondent) Jim Acosta is no Peter Doocy.” 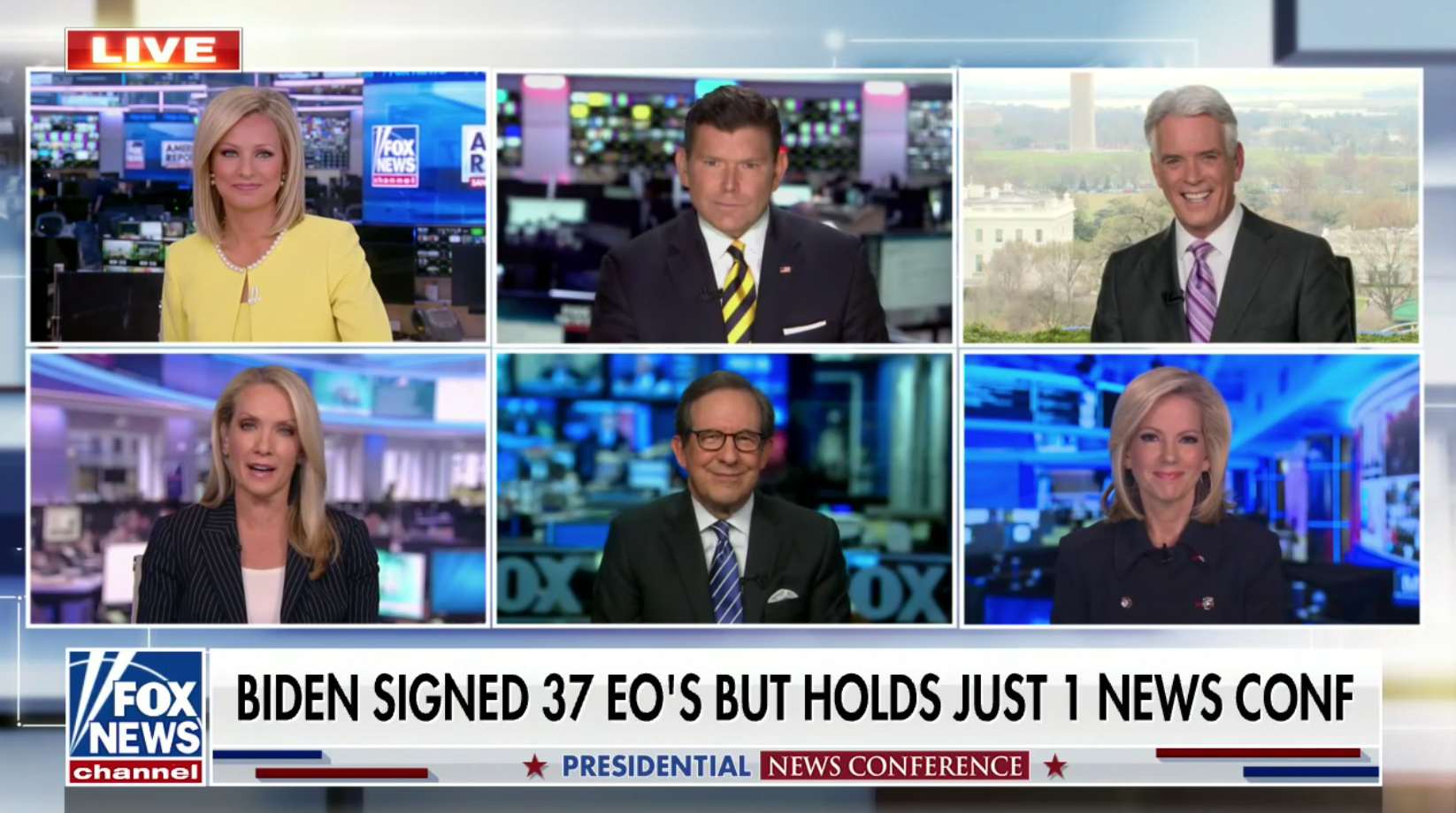 Later in the commentary, a banner read “Biden signed 37 EO’s (sic) but holds just 1 news conf,” another swipe at what Fox no doubt views as Biden ineffective governing.

Most presidents also sign a handful of executive orders in their early days in office that are considered routine. 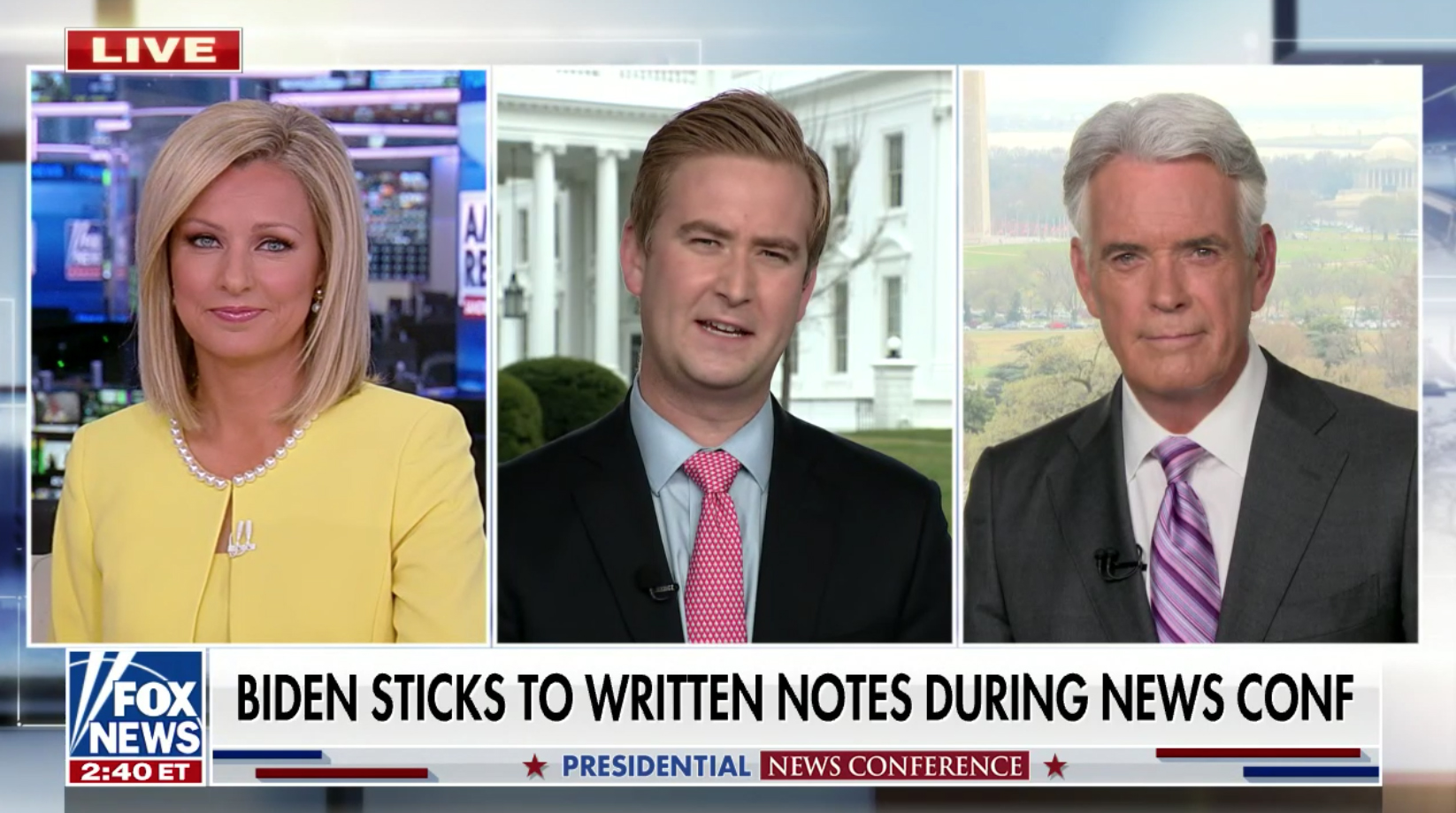 Fox also continued to use the “67 day” banner during its analysis, but also put up one reading “Biden sticks to written notes during news conf.”

Again, this is true — but it’s also not uncommon for government officials from all levels to come out with notes, and the “sticks to” seemed to be a bit of a stretch, given that he mainly appeared to use them to refer to specific details or data (instead of just pulling “guesses” out thin air).

This brings up another favorite Fox conspiracy theory — “predictions” that Biden would use a prompter during the event.

As captured by the cameras in the room, Biden did not have the freestanding glass panels often used at events when using a camera mounted prompter would be impractical. Of course, the camera couldn’t capture a prompter mounted to itself (unless it pulled so far out that one could see the assembly).

However, the room was filled with a reduced press corps, including Fox’s own Doocy, all of whom could have turned around and seen if a prompter was in use — and there were no reports of that.