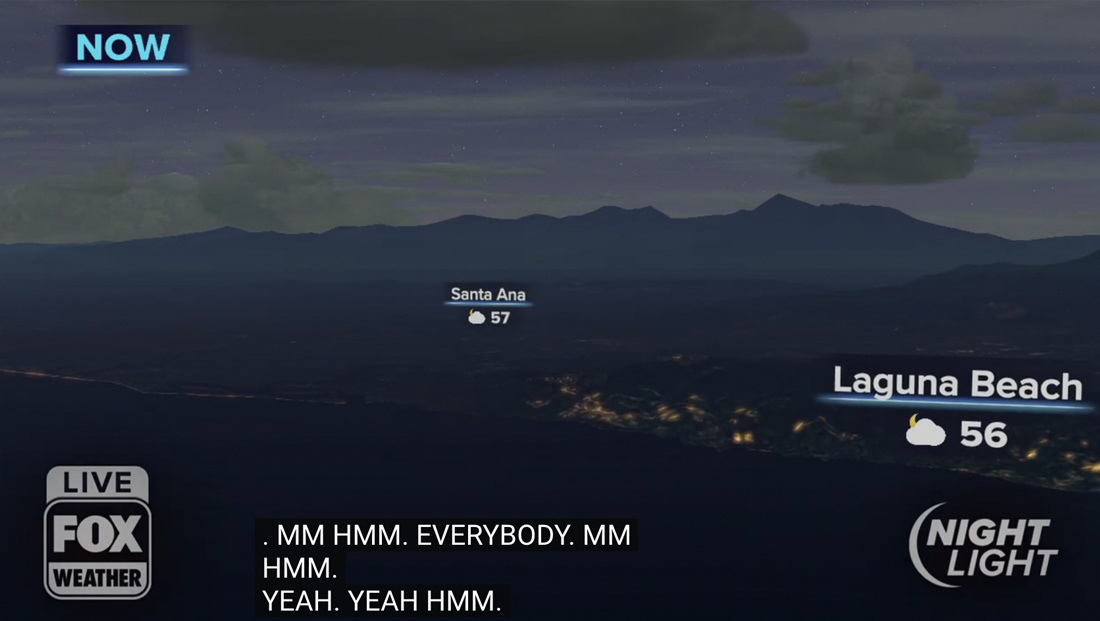 Fox Weather’s overnight feed of graphics and maps has started airing what appear to be machine-generated closed captions that attempt to take instrumental music and create words — with somewhat entertaining results.

The network offers “Night Light” from 1 a.m. to 5 a.m. eastern. The program consists entirely of computer-generated imagery and features no hosts.

There are a variety of options that can be shown — ranging from radar overlays to temperatures in select regions to data such as lightning strikes, all of which are depicted against dark satellite-like imagery of the U.S.

It’s actually a clever and even informative way to program overnight hours when viewership tends to be lighter.

During “Night Light,” Fox Weather plays mostly soft acoustic-style music as its only audio; no voices, computer-generated or otherwise, are present like with how “robot” voices are sometimes used to read out forecast information fed into the system on other weather networks.

It’s that music that appears to be triggering closed captioning that seems to be trying to turn the music into words.

The results are somewhat entertaining — most of the music gets interpreted as “hmmm” and “mmm” (though the exact number of “m”s varies). Every so often a “real” word gets thrown in.

The captions appear on both the FoxWeather.com stream and on pay-TV providers that carry the network, though it’s not clear if the over-the-air signals have them.

Technically, Fox Weather likely wouldn’t be required to caption “Night Light” because most or all of the pertinent information is already shown on screen as text that someone living with hearing loss could read.

While the music certainly adds a nice mood to things, it doesn’t have an inherent purpose and also doesn’t feature lyrics (in theory, if it were to be properly captioned, it could include a description of the music — such as “relaxing music plays” or feature a music note icon).

It appears the attempted captions are being generated via some kind of automated, perhaps AI-powered system that “listens” to the audio and attempts to turn it into text. This is evident because commercial breaks during “Night Light” appear to be captioned by the same or a similar system, since most of them contain spoken words, but the captions observed in April 2022 are often off too.

For example, in the captions from a commercial immediately proceeding the “Night Light” content, which remained “stalled” on screen after the weather graphics began rolling, the word “call” appears to have been transcribed as “cop” and the “1-800” prefix became “1 803.”

It’s not immediately clear when this issue started — archives of the program recordings from months past do not appear to have the issue.

There is a growing trend among broadcasters to use speech recognition and AI to automatically transcribe what’s being spoken on screen into closed captioning. Sometimes this is done with a human monitoring it to ensure that it’s accurate — and the operator can jump in and make corrections quickly if the computer can’t transcribe it correctly.

Some captioning systems even allow the operator to change text that’s already been shown on screen to the correct word or phrase in case of an error.

Previously, live programming was captioned live, with humans watching the show and typing out the words as spoken, often using special transcription keyboards, which is why captioning sometimes falls behind the on-screen action. Some companies began offshoring this task as well.

Other approaches with live programming that can be scripted including using the prepared script, if one exists, as a way to provide captions either entirely or to supplement the work of a human operator. When breaking news causes anchors to go off script, however, this can be problematic and require human or computer intervention.

Weather and sports can sometimes be problematic because in many cases these segments aren’t scripted at all, with the talent ad libbing all or most of the words they speak.

Some systems also combine a prepared script, if available, with speech recognition to synch the words up correctly.

The use of AI and speech recognition to generate captions from scratch, however, is still a bit shaky and could result in legal trouble for a broadcast because of certain FCC requirements about when captions must be provided and with a certain level of accuracy.

For example, stations have gotten in hot water with the FCC in the past for not providing accurate, timely captions during breaking news, which can be especially concerning during severe weather.