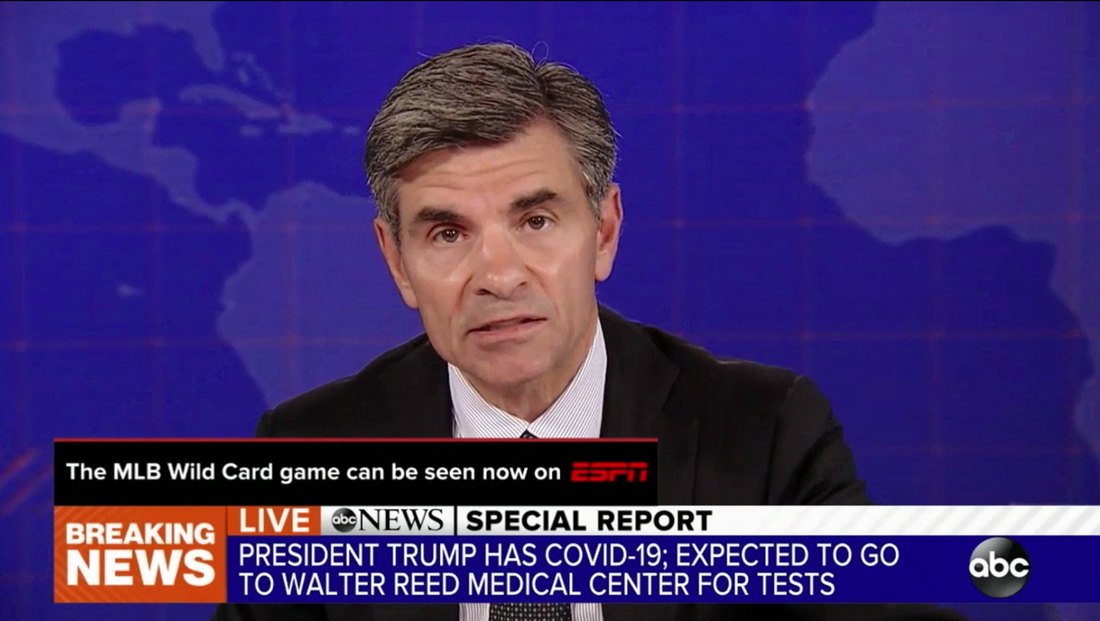 The news that Donald Trump would be moved to Walter Reed Friday, Oct. 2, 2020, lead to significant coverage across broadcast and cable.

ABC had the advantage of already being in network programming in most markets — the MLB wildcard game — so it was able to have its commentators there announce that the game would be moving to ESPN and that the network would be carrying a special report next. It also seamlessly switched to the special report slate and chief anchor George Stephanopoulos.

Normally ABC would not have been broadcasting live to most of its stations at that time of day.

CBS cut in with a report from “CBS Evening News” anchor Norah O’Donnell.

NBC News interrupted programming at about 5:15 p.m. eastern time with a special report from Lester Holt.

Ironically, in Chicago, WMAQ interrupted what it called a “moment of zen” on its 4 p.m. local time newscast when the audio cut out and, after a few seconds, a slightly cut off version of NBC’s special report slate appeared before Holt began his report.

Both NBC and CBS continued to carry special reports over the normal air times for “NBC Nightly News” and “CBS Evening News,” though full, updated versions of the newscasts were still produced later for the mountain and westward time zones.

The network evening newscasts would have started right as cameras at Walter Reed Medical Center were capturing Trump leaving Marine One and heading into a vehicle that would take him to the building entrance.

ABC’s Stephanopoulos did, however, transition quickly (at least in the eastern and central time zones) to “World News Tonight” that got off to a bit of a rocky start with some graphic glitches during its tease headlines as well as a slip up with the large video wall that sits behind anchor David Muir.

On cable, CNN’s Wolf Blitzer was already in the middle of covering updates about Trump’s health since the White House announced his positive test for the coronavirus and had to quickly shift gears and deliver the breaking news.

MSNBC anchor Nicholle Wallace, who was hosting her two hour “Deadline: White House” (and who has worked in the White House) when the news broke and interrupted a guest to deliver the late breaking details.

Fox returned from a break that was airing an extended commercial (at least in the Chicago market) for a pro-Trump Super PAC that had just proclaimed “time is running out” to support the candidate and “The Five” personality Jesse Watters tossed to John Roberts at the White House.

On CNBC, new “The News” anchor Shepard Smith joined the “Fast Money” from a flashcam in the CNBC newsroom to deliver an initial report before disappearing for a bit.

He then moved over to the temporary set of his newscast and continued coverage from there.

Eventually, the network, after some glitches, managed to permanently kill the bug and switch to use the graphics packages used on “The News” — eventually switching the lower thirds over to the look.

In addition to anchoring “The News,” Smith is also heading up CNBC’s general breaking news efforts as well.