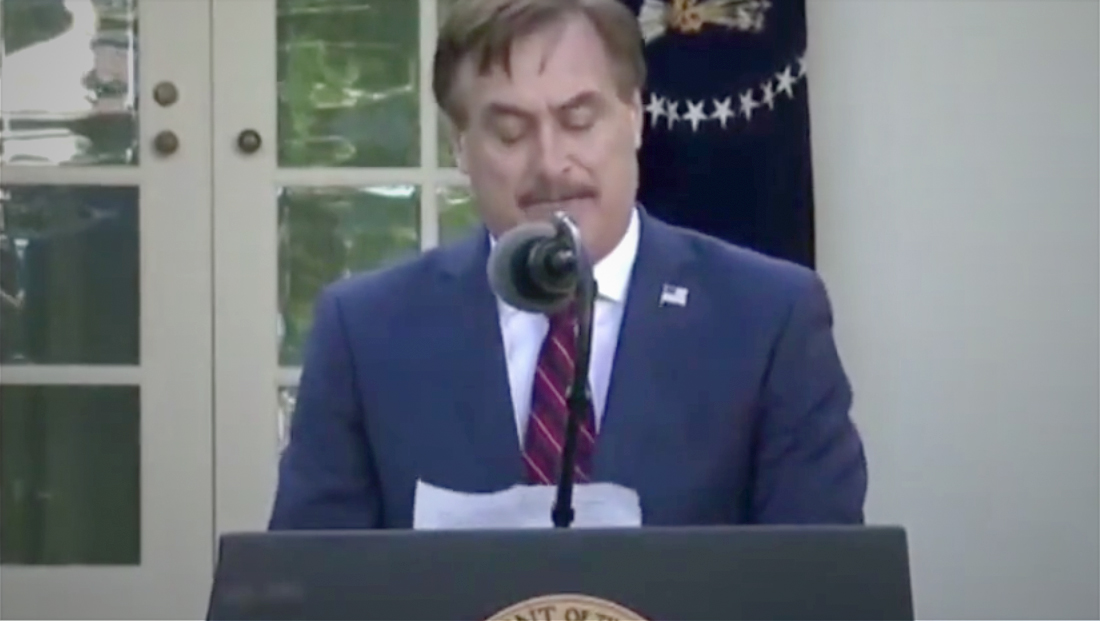 Lindell’s event — which he is touting as bigger than Elvis’ 1973 Hawaii concert — is by invitation only but portions will be streamed.

During the event, Lindell says he will reveal “evidence” that the 2020 election was inaccurate. He further claims he will show “evidence” of election meddling that will lead to the reinstated of Donald Trump as president.

Numerous officials, studies and even a growing number of GOP politicians have agreed there is no evidence of widespread fraud or misreporting of 2020 election results. It is also constitutionally impossible, even if the vote tallies were to somehow be revised in Trump’s favor, to “remove” a current president and replace him or her with someone else.

Meanwhile, Lindell appears to have taken offense to the Fox network turning down an ad for his event — and said he’s pulling all ads for his MyPillow products to hurt the network’s bottom line.

Fox appeared to acknowledge the ads are being pulled in a statement to HuffPost, while also noting Lindell is missing out on getting his ads in front of its large audiences.

After a dip following Joe Biden’s victory, ratings have stabilized and Fox leads the ratings ahead of rivals CNN and MSNBC.

According to Wall Street Journal reporting, Lindell spent $50 million with Fox in 2020 and has racked up $19 million so far this year. The New York Times revealed MyPllow fueled nearly a third of the $75 million in ad revenue “Tucker Carlson Tonight” at the midpoint of 2020.

Lindell told The Daily Beast he has no plans to resume advertising on the network.

Lindell, who went from being a self proclaimed drug addict to a multimillionaire thanks to his MyPillow invention, has since become an outspoken conservative.

His signature product is sold heavily through advertising on TV. Meanwhile, Lindell is facing a massive $1.3 billion lawsuit from Dominion Voting Systems over what it says are libelous claims about its voting equipment and company background that presumably would have given Biden some advantage in the election

This isn’t the first company to pull ads from Fox — but it is notable because it comes from the owner of a company who is an outspoken supporter of Trump, the network and serves as a frequent guest on Fox shows.

Lindell also appears on even more right wing networks OAN and Newsmax, but it’s not clear if he will take his ad dollars there or if those networks would even accept the ads Fox turned down.

OAN has been mentioned as a potential target for additional lawsuits from voting systems companies, while Newsmax withdrew its reporting and settled a lawsuit over the claims. Both networks have also implemented disclaimers about election claims.

OAN agreed to run Lindell’s paid “Absolute Proof” program but required disclaimers to appear before and after it aired.

Most of the other companies who have pulled ads from the network have done so in response to offensive comments made by various hosts over the years. Some of these companies have maintained their boycott of the network and opting to spend ad dollars elsewhere, while others have come back after some time away.

Fox is facing two lawsuits — $2.7 billion and $1.6 billion — from Dominion and fellow voting systems company Smartmatic over claims its hosts made over the equipment’s alleged role in the outcome of the election.

Smartmatic gear was only used in one county in the U.S. during the 2020 election — Los Angeles, which tends to lean Democratic.

The network backtracked on those claims, airing clarifications, and also having hosts cut off guests who revive the claims or run disclaimers when such statements are made on air.