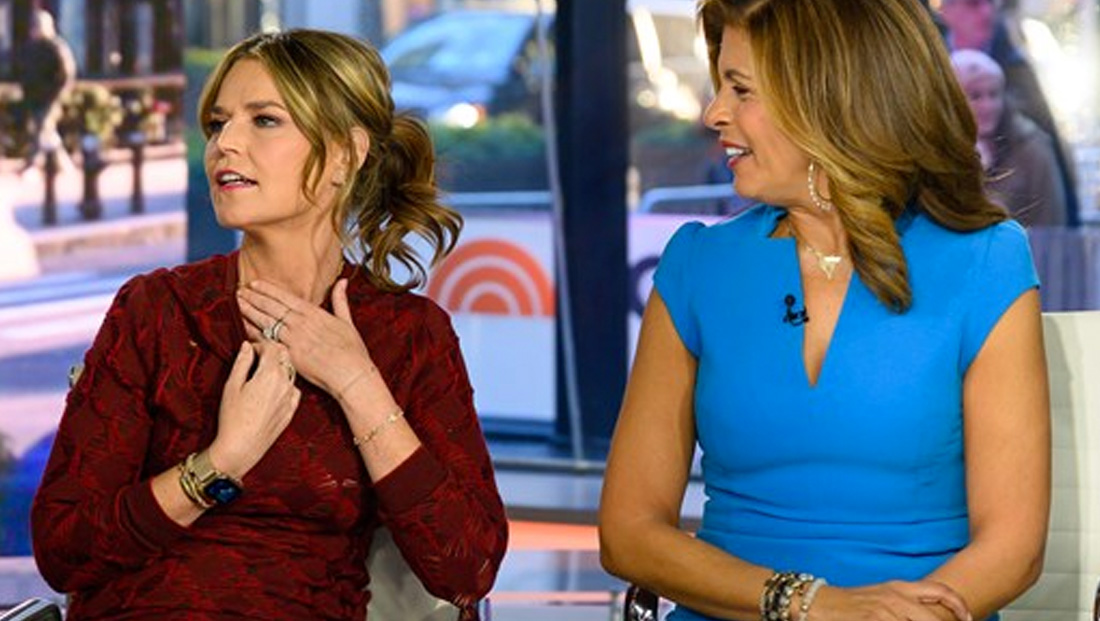 The network aired a retrospective package that touted Guthrie as both a serious journalist who can handle tough and lighthearted interviews as well as having fun on the road and being a great part of both her real life and TV family.

However, Guthrie’s road to the chair at “Today” was a bumpy one.

The 10 year mark the show celebrated refers to her joining the third hour of the show in June 2011, known for a time as “Today’s Take.”

At that time, she had already made a name for herself within NBC as co-anchor of MSNBC’s “The Daily Rundown” alongside “Meet the Press” moderator Chuck Todd as well as a legal correspondent for the network (she holds a law degree from Georgetown).

Guthrie was promoted to primary co-anchor of the first two hours of the show in July 2012, a move that many speculate had been in the works for some time.

Her move to the anchor desk was awkward, at best — she replaced Ann Curry, who had spent years with the show first as news anchor and then as primary co-anchor from 2011 to 2012.

Even after a short time on air, NBC execs were reportedly worried about Curry’s on air performance and lack of chemistry with co-anchor Matt Lauer, who had previously been the show’s news anchor.

Curry herself had been promoted to the job after Meredith Vieira, NBC’s choice to replace longtime co-anchor Katie Couric, announced she would be leaving the show in 2011.

Some noted that Curry had been essentially “passed over” for the job when Couric left in 2006 and that she was in line for the seat following Vieira’s decision to leave.

Curry did eventually get the job but Lauer reportedly complained about her behind the scenes and wanted her removed.

Her last day on the show was marked with an awkward, tearful announcement and NBC, in what many saw as a conciliatory move, gave Curry the title of “at large” anchor and created her own unit within the network that produced content for various NBC properties, but her appearances would slowly diminish and she eventually quietly left the network.

Incidentially, Curry never got a glitzy send off package that many past “Today” anchors have gotten when departing the show and similar to the one NBC produced for Guthrie’s 10 year anniversary.

Guthrie was then left to helm a show that had seen declines in ratings, including falling from its longtime dominant top position to the growing “Good Morning America.”

Guthrie was forced into another awkward position Nov. 29, 2017, when she sat at the anchor desk alongside Hoda Kotb, who would eventually become her permanent co-anchor, to announce NBC had fired Lauer for alleged sexual misconduct with coworkers.

Lauer has denied any wrongdoing and was never charged criminally.

Over Guthrie’s tenure, which has included the aftermath of Lauer’s firing that included, among other things, an alleged attempt by NBC to cover up Lauer’s actions, “Today” has continued to slip in the ratings in total viewers, though it still typically maintains a slight lead over “GMA” in the key demo.

In the June 2021 package celebrating Guthrie, Lauer was briefly seen in a few clips from when he co-anchors the show with Guthrie, but he was, not surprisingly, not interviewed, included or otherwise mentioned in the celebrations.

Meanwhile, “Today” still remains one of several thorns in the side of NBC News execs — with “NBC Nightly News” also loosing ground to ABC in the evening.

NBC recently hired former ABC News anchor Tom Llamas, who will anchor a streaming newscast for NBC News Now. However, there has been speculation that Llamas could be in line for another, larger role at NBC should there be changes to the talent lineup elsewhere.

He has been cited as a possible replacement for Lester Holt on “Nightly,” but it’s also possible he could start appearing on “Today.”