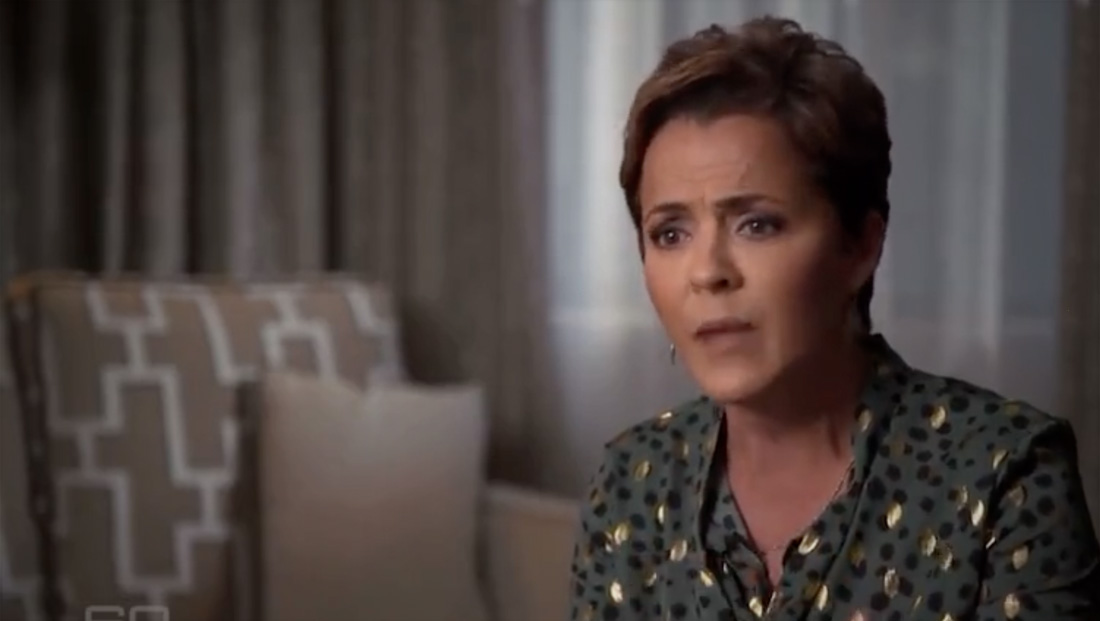 A Trump-endorsed candidate for governor of Arizona walked out on an interview with “60 Minutes Australia.”

Kari Lake was being interviewed remotely by Liam Bartlett (though with a broadcast quality lighting and camera setup) for a segment that aired Sunday, March 13, 2022.

Bartlett referred to “your man Trump,” which set off Lake — who seemed incredulous that Bartlett would use that phrase despite being, as Bartlett pointed out, being endorsed by him and her record of vocally supporting his actions in the past.

“I’m still amazed that you say that. That’s just so disrespectful. It’s just the flippant attitude. It’s just, it’s obvious you’re trying to twist this to make me look bad,” she said after Bartlett attempted to get her to answer a question all as cameras continued to roll.

She continues to be irritated by the reference as the interview ventures into a question about gun rights, when Lake fired back by saying Australians have “no rights” because the country “melted down our guns.”

Her criticism was targeted at a 1996 law in the country that requires gun owners to hold a license to own or carry certain weapons.

She also took umbrage with the country’s strategy to use empty hotel rooms to quarantine incoming travelers during the height of the COVID-19 pandemic, a tactic some compared to being held prisoner.

Lake appeared to have enough, however, when Bartlett asked her if she agreed with Trump that the accused and convicted January 6 Capitol insurrectionists should be pardoned.

“Liam, it was a pleasure, but I’m leaving. This has just become comical,” she said. “You actually make some of the crazy reporters and people at CNN look almost respectable so thank you sir,” she said as she stood up and appeared to gather her belongings in preparation for walking out on the interview.

The cameras were still rolling when Lake appeared to complain to someone in the room with her, presumably one of her staffers or campaign advisers.

“That guy’s a complete nut. Seriously, a completely insane person. Do people in Australia listen to him? That’s the craziest thing I’ve ever experienced,” she said, apparently not realizing or caring that she was still mic’d and her audio was still being recorded.

Lake was, perhaps, emboldened by the fact that she wasn’t in the same room as Bartlett since the interview was being conducted remotely.

The setup typically involves at least one camera in the room with the correspondent and one with the interviewee. Often both parties are professionally lit just like they would be for an in person interview. The major difference is that, instead of being seated across from each other, monitors or computer screens are used to show the other person’s image.

Networks often conduct these interviews with both people facing “off camera” rather than looking directly into the lens as they might do during a live interview or panel being conducted remotely.

By having them not make eye contact directly with the camera, which is often achieved by positioning the monitor they see the other party on off center, the footage looks more like an in person interview.

This practice wasn’t uncommon even before the pandemic when it was either impractical or too costly to send a report on location for an interview. Its use has increased since the pandemic, however.

It’s also common for people to be interviewed this way by correspondents working on shorter, daily news packages. In some cases the interview will even be conducted by a producer or other staffer, who generally won’t appear on cameras and only the guests’ comments will be included in the finished broadcast.

TV news also uses this technique for media relations reps and other guests, who are often experienced in speaking on camera or serve as analysts, to record a few key statements on a story. They will often still face off camera, which often means they’re not looking at anyone while their comments are taped for later use.

Trump-endorsed AZ Gov candidate Kari Lake sat down for interview with ‘60 Minutes Australia,’ which aired tonight. Things when downhill fast when she was asked if she agreed with Trump that J6 defendants should get pardoned. She ends up storming off the set. pic.twitter.com/Jmat6BTS1l

“60 Minutes Australia” is produce by Nine Network and is operated separately from the U.S. version. It licenses the name from CBS.

Arizona played a key role in the results of the 2020 election. It was one of the last states most news outlets called.

It was also the target of GOP operatives and conspiracy theorists who made unfounded claims of widespread voter fraud in the state.