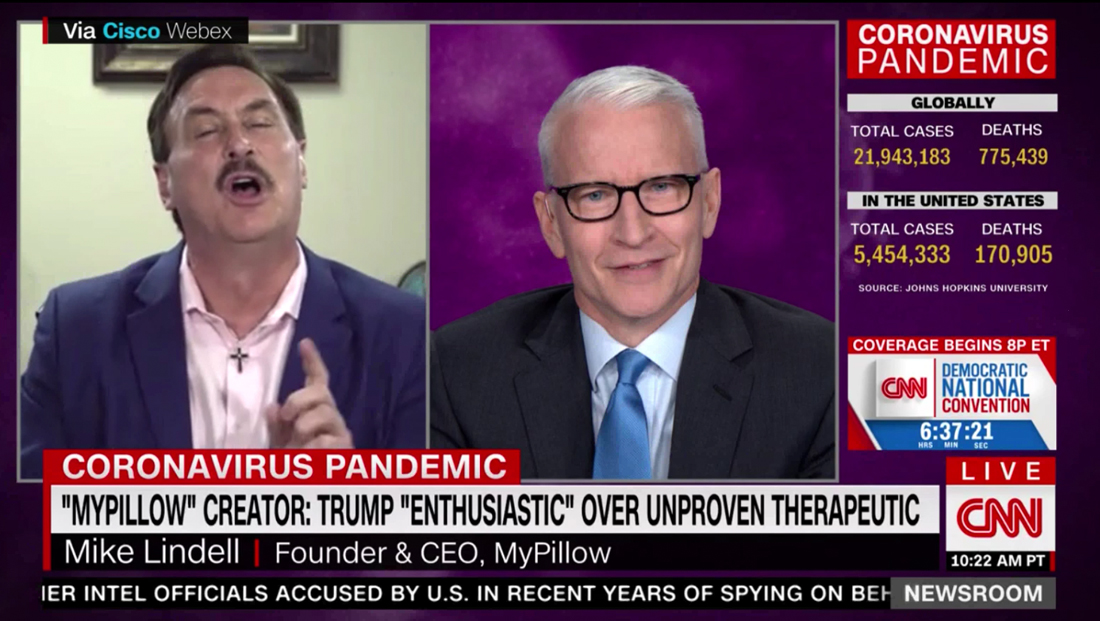 In a rambling, heated interview, CNN anchor Anderson Cooper called Mike Lindell, the founder and CEO of MyPillow and Trump surrogate, a “snake oil salesman” — while Lindell fired back by saying Cooper “probably” sleeps on one of his pillows.

The interview aired during the 1 p.m. eastern block of “CNN Newsroom,” which Cooper has been anchoring for several weeks.

The appearance quickly spiraled out of control with Lindell becoming visibly agitated and yelling over Cooper, who tried to slip in key facts about Trump, Lindell’s sketchy business practices and the so called coronavirus treatment oleadrin.

Lindell is not a licensed or trained medical professional.

At one point, Lindell loudly suggested that Cooper sleeps on a MyPillow — which Cooper denied.

Lindell, for his part, said he was doing what Jesus would want him to do and said that oleadrin “saved” himself and his family from COVID-19.

Cooper continued to note that there is no solid scientific evidence that oleadrin works — and noted that if not used correctly, can be toxic. Lindell yelled his objections to these claims while also denying he has a financial interest in peddling oleadrin, despite he took a seat on the board of a company marketing the “treatment” recently and likely stands to benefit from the sale of any such products.

At another point, Cooper asked Lindell how he sleeps at night.

MyPillow has been the target of accusations ranging from claims that its product can help cure medical conditions (which Lindell claimed in the interview were statements by customers and not directly claimed by his company) to a Better Business Bureau warning about how the company markets its misleading “two for one” pricing.

An extended cut of the interview can be watched below via CNN.