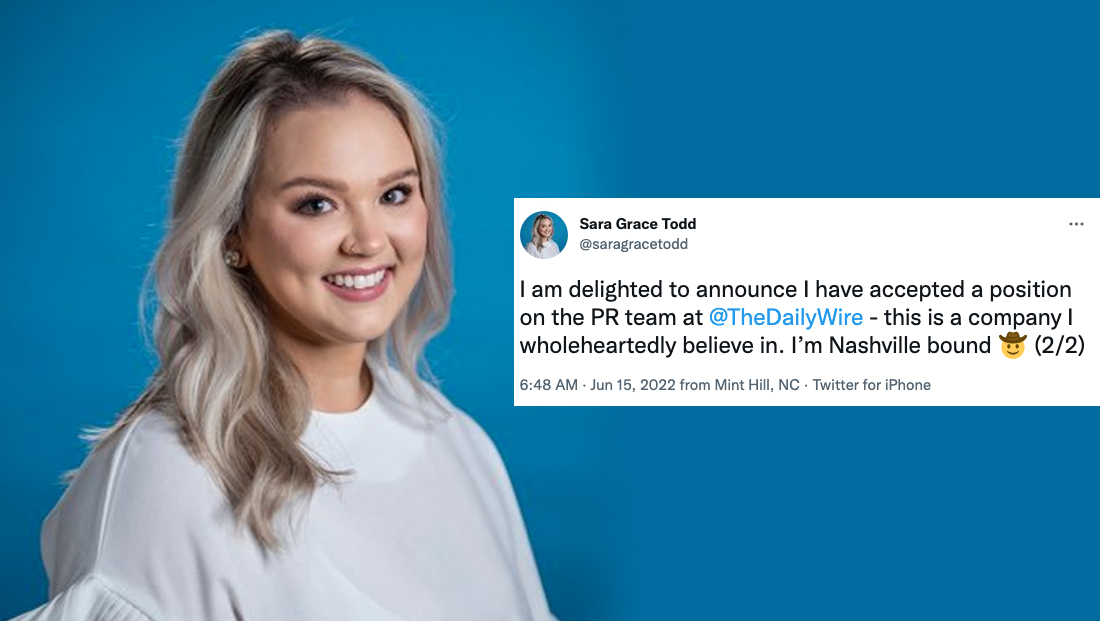 A now-former local news producer announced her departure for a PR position at a conservative news outlet by saying it’s a company “I wholeheartedly believe in.”

Sara Grace Todd, who worked for WBTV in Charlotte, North Carolina, until June 15, 2022, announced she was leaving for a PR job at The Daily Wire in a tweet. She had worked at the station for three years.

While there’s nothing wrong or unethical about Todd taking a position for any company after leaving TV news, no matter what its ideology, Todd’s decision to go work for a known conservative outlet with a sketchy record of using misleading, incomplete or out-of-context information supporting GOP views is at least a sign that the media isn’t entirely full of liberals as right-wing personalities attempt to portray.

Prior to leaving WBTV, Todd posted a tweet May 3, 2022, reading “I’m adopted. I’m the product of a careless one night stand. My half brother is the product of rape. To see Roe vs. (sic) Wade overturned would be monumental #chooselife.” Like most journalists, her bio includes a disclaimer that the views posted are her own.

In her updated Twitter bio, Todd notes her former employer and working at WSET in Virginia, as well as being a graduate of Liberty University, the conservative college founded by the late Jerry Falwell and self-proclaimed trainer of “champions for Christ.” In addition to labeling herself as an Oxford comma enthusiast, Todd also says she has been “Redeemed by the cross.”

In general, PR jobs have a different set of ethics that guide how practitioners operate than news organizations and it’s likely that her job will involve helping to promote right-wing viewpoints and misinformation as well as responding to criticisms of perceived bias.

Since joining The Daily Wire, Todd has retweeted a Dan Bongino tweet reading “Today is June 23rd, 2022 and Joe Biden is the worst President in US history.”

During her time at WBTV, she retweeted numerous tweets supporting right-wing ideas, including claiming there are only two sexes and challenging “change my mind.” She also retweeted Republican senator Jim Jordan’s tweet reading “Where’s the primetime hearing on President Biden’s botched Afghanistan withdrawal?” Others include ones critical of children’s drag shows, one attempting to dispel notions that some cultures have fluid notions of gender from now colleague Matt Walsh among others. There are also numerous comments on various clips from Fox’s conservative cable channel.

Todd did not include the station name in her old Twitter handle (just using “TV”), though did refer to her employer in her bio while attempting to spin the account her personal one. Her role as a producer is also slightly less high profile than on-air talent, whose social media often comes under much heavier scrutiny, but apparently, Todd couldn’t even been bothered to avoid even the appearance of being biased out of respect for her employer and colleagues who try to remain biased.