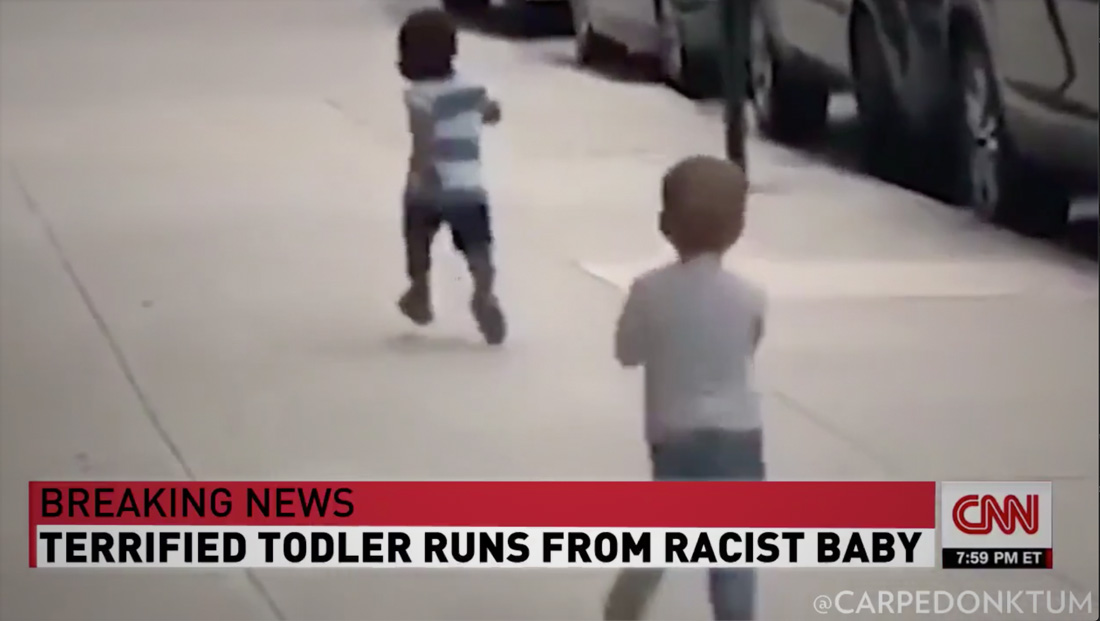 Donald Trump tweeted another attack against what he calls “fake news” — only for Twitter to flag it as “manipulated media” and later yanked it for a copyright violation.

The clip uses video from a real news report about a friendship between two toddlers — one white and one of color.

In the lower left corner of the screen a version of the real CNN bug is visible.

Next to that is a red and white lower third banner that first reads “Terrified todler (sic) runs from racist baby.”

A full screen graphic then reads “What actually happened” and shows the complete clip that shows the two boys running toward each other, hugging and then running off in the same direction. This is done without the CNN bug or fake lower third.

That last part is what the meme used at the top of the clip — when the boy of color is running in the opposite direction of the white child (though in reality they were actually running in the same direction, one after another).

The video bears a credit line reading “CarpeDonktum” — which appears to be a Twitter account with a bio reading “Eternally Sarcastic Memesmith specializing in the creation of memes to support … Donald J. Trump. Content that I post was ‘Doctored’ by me.”

The video was later removed by Twitter because of a copyright complaint on behalf of the owner of the video, though it is not immediately clear who filed the report.

The profile also notably includes the blue diamond emoji as part of its name in what appears to be an attempt to mimic the color of the blue “verified” Twitter icon that is placed in a similar position.

“America is not the problem. Fake news is. If you see something, say something. Only you can prevent fake news Dumpster fires.” the clip continues.

The lower third is, like so many memes using purported news footage, clearly simply laid on top of the video — it doesn’t match the shading of the CNN bug in the corner.

It also doesn’t use CNN’s proprietary CNN Sans font and also contains a typo (not that any network is immune from typos in Chyrons).

Twitter added a “Manipulated media” disclaimer under the video clip and clicking on it leads to an “events” page with additional information about the faked video.

As of this writing, however, that flag does not appear on embedded versions of the tweet such as the one shown above.

While the meme does make a valid point in that video or other imagery can be edited or truncated to portray many different scenarios, Twitter appears to have taken issue with how the clip is used to convey the impression it was a real CNN report.

Technically, the meme actually ended up using fake news to say “fake news” is bad. It could be argued that the meme used that approach ironically to illustrate its point, but attempting to create the impression that the clip came from CNN is much more egregious and seems to be what got the clip in hot water.