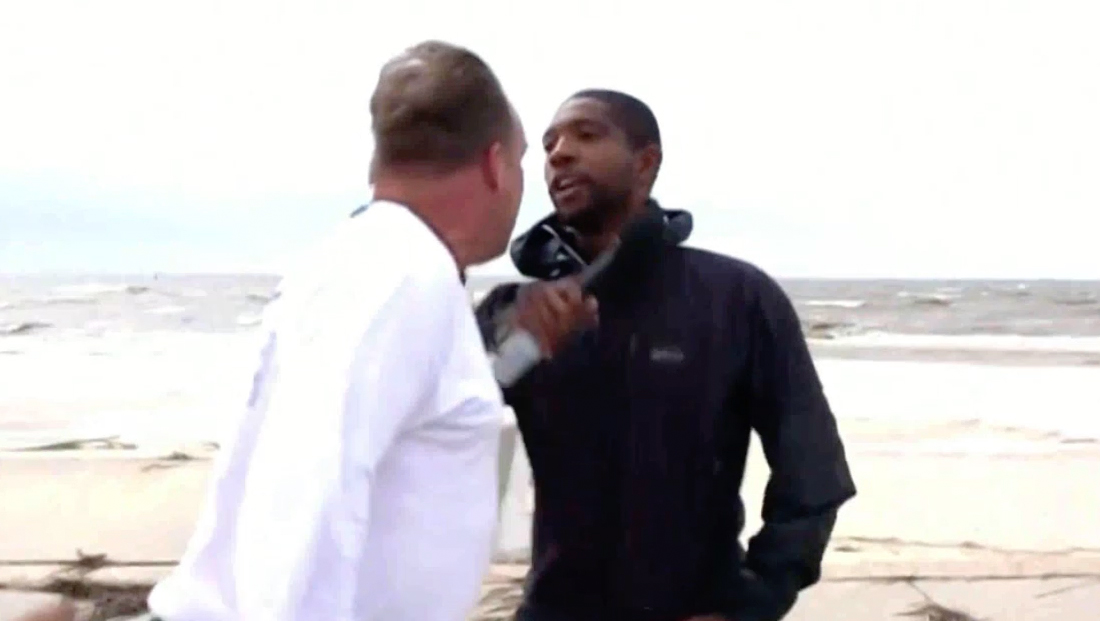 NBC’s Shaquille Brewster was forced to toss back to the studio when a heckler interrupted his live shot from Gulfport, Mississippi.

Update: The man allegedly involved in this incident has been identified and is wanted for multiple arrest warrants.

Appearing on MSNBC’s “Craig Melvin Reports,” Brewster was giving an overview of the aftermath of Hurricane Ida when a white pickup track can be seen parking in a space a short distance behind him.

A white male then emerges from the vehicle and charges quickly toward Brewtser’s live shot location.

Brewster attempted to continue his report as the man’s rants could be heard getting louder. He then said, “Craig, I’m gonna toss it back to you, because we have, ah, a person who, um, needs a little help right now.”

As he was saying that, the man could be seen on camera barreling toward Brewster, who put his mic and hand up on defense.

Most of what the man was saying is unintelligible, but it almost certainly appears to be a rant and, at one point, he can be heard yelling what sounds like the word “accuracy,” presumably attacking NBC, MSNBC and Brewster for what he perceives as a lack of accuracy in their reporting practices.

Of course, the “accuracy” of MSNBC’s reporting and commentary is at least somewhat subjective, but MSNBC has notably avoided any lawsuits over false reporting that the election was rigged, while Fox’s cable commentary channel is facing billions of dollars in lawsuits over claims aired on its programming.

It’s also worth noting that the man, who was not wearing a mask, came within inches of Brewster’s face and nose.

Neither Mississippi nor Gulfport has a mask mandate in place and, in either case, the whole incident happened outdoors, where many states have relaxed mask guidelines. However, the man clearly came within inches, according to the clip, of Brewster.

Brewster was also not wearing a mask, which appears to be allowed under NBCUniversal policy, especially given that he was reporting outdoors in a nearly deserted area, presumably socially distances from any crew on scene with him.

Brewster later tweeted that “The team and I are all good!”

Appreciate the concern guys. The team and I are all good!

Just in case it’s not clear, this is never OK to do, no matter what you feel about the network or reporter involved. Reporters risk their lives every day to deliver the news and even if they’re just reporting on a county fair, they are still just trying to do their jobs and don’t deserve unwanted harassment from the public.

Don’t yell, beep your car horn or run up yelling or attempt to touch a reporter, especially if they’re live. Most reporters are happy to say hi to viewers, but be respectful and ask if it’s a good time to approach — and respect their personal space, especially during a pandemic. It may seem like a fun, impulsive thing to do, but it rarely ends up making the heckler look good.

If you want to wave behind a reporter doing a live shot, that’s perhaps less disruptive, but also keep in mind that reporter could be on a serious assignment, such as covering a shooting or accident and waving cheerfully at the camera is going to put you in an odd juxtaposition. Of course, there are events where reporters encourage viewers to get involved and wave or even cheer, but they’ll typically let you know if they want “audience participation.”

Although this type of incident has been a concern for decades, there appears to be a rising trend in increasingly brazen attempts to verbally or physically harass reporters while working on assignment, including cases where female reporters were allegedly groped. Some of these incidents end up criminal prosecution if police are called or the person can be identified by the tape or witnesses.

Reporters during the 2021 Capitol Insurrection also reported numerous incidents of harassment and vandalism to their equipment.